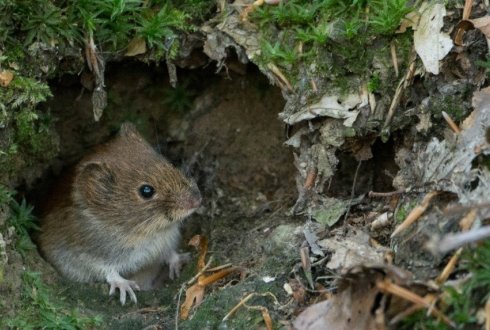 Rodent mothers produce more offspring after smelling odors produced by frightened males. This is reported by a team of biologists from Finland and the Netherlands. Their study of wild bank voles (Myodes glareolus) in Konnevesi, Finland, is published today in the open access journal Scientific Reports.

Fear of being eaten has the power to shape populations and drive evolution. “What is most striking about this study is that the cause of the change in numerical reproduction was indirect,” says Marko Haapakoski from the University of Jyväskylä, Finland. “Second-hand information about predators was sufficient to increase the number of offspring.” The effect the authors report is large: exposed mothers produce litters with about fifty percent more pups compared to unexposed control mothers.

“Predation involves more than just predators consuming prey,” explains Kevin Matson of Wageningen University. “Predators can also scare the living daylights out of the animals they target. Our study demonstrates that the resulting fear changes how these prey animals behave and reproduce.”

The study shows that a frightening experience can be communicated to neighboring individuals in the population, even when the neighbors do not see, smell, or hear an actual predator themselves. Alwin Hardenbol, who conducted this research as part of his master’s thesis at Wageningen University, explains: “When a separate group of male voles were exposed to a weasel, they produced chemical messages that could be read by the voles in our study.”

Vole mothers might produce more offspring when they sense their chances of being eaten soon are high and that their next litter may be their last. Simple physiological mechanisms could allow mothers to adjust litter size. For example, previous research has shown that females can produce more pups simply by mating with more males.

Implications of the findings

Danielle Lee of the Southern Illinois University (USA), an ecologist specializing in rodent behavior and who is unaffiliated with this research project, described the significance of this research: “This innovative experimental study bridges the proximate and ultimate explanations of small mammal behavioral responses. It’s been long hypothesized that small, highly fecund (so called “r-selected”) species like voles might respond to heavy predation via reproductive compensation.”  This field study “shows how these responses are mediated via chemo-olfactory cues,” she said. “The work demonstrates once again the importance of this modality for intraspecific communication, population regulation, and trophic interactions.”