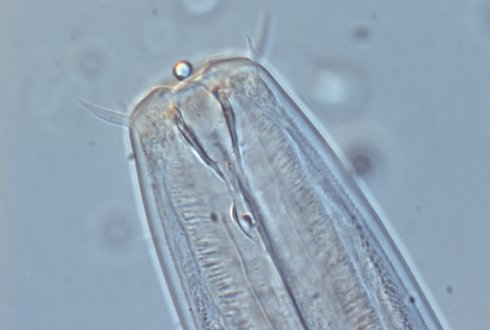 Based on occurrence and relationship, nematodes can be divided in two groups: marine nematodes and inland species. The animal parasites belong to the latter. The inland species live in soil, in and on plants, in animals, dung, deep ground water; all inland species can be found in freshwater where they survive on aquatic plants or have been washed in with rain water and subsequently survive for a long period. If there is one group, which is typical for freshwater, then it are the members of the Tobrilidae. Tobrilus species occur all over the world; the impression exists that they evolved to a heterogeneous group in freshwater. Some species feed on unicellular algae, others feed on bacteria or are carnivorous.

(Click on the pictures for an enlargement, © Wageningen University & Research, Laboratory of Nematology/Pictures: Hanny van Megen)