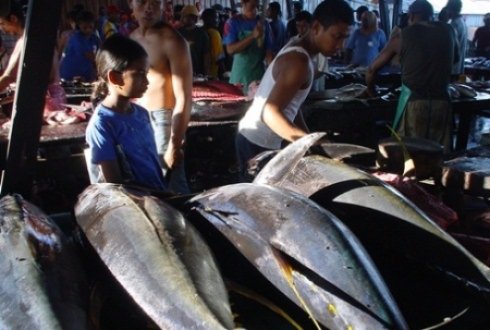 Global value chains are increasingly being used as sites of environmental governance, by linking consumers and producers together in global space.

Consumers play an important role in steering market, which can lead producers to change their practices in response to changing demand. However, so called 'ethical' consumerism is facilitated by a range of market based tools including certification schemes such as the MSC, but also a range of retailer and brand strategies such as those adopted by the canneries associated with ISSF, or companies such as Pacifical and Fish4Ever.

Together these market based tools comprise a value chain governance arrangements which are expanding their influence in tuna fisheries in the Coral Triangle and Western Pacific. While attention has been given to the potential benefits of these value chain arrangements on the tuna in the region, there is a poor understanding of which fishers will be enrolled in these schemes, and whether and how they will change their practices. In particular, little is known about how these mechanisms will set fishers on a path to continual improvement of reducing by-catch, or reducing capacity and effort on juvenile bigeye and yellowfin tuna stocks across the Coral Triangle and Western Pacific.

Furthermore, there is little empirical evidence of how these value chain mechanisms will influence the distribution of market power between fishers, brands and retailers in the highly dynamic global canned tuna market.