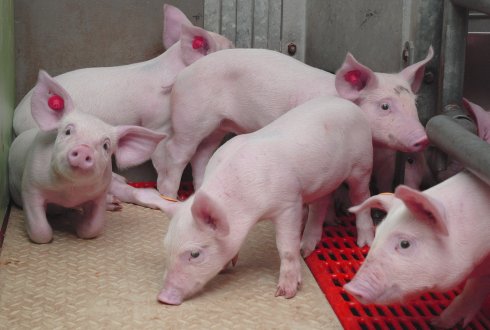 Diseases do not stop at the border. The threat of exotic diseases infecting our livestock is increasing. The need of joint forces to fight animal diseases becomes more and more important, both national and international. Collective international investment in the development of means and control strategies is seen more often. The need for exchange of knowledge and insights is internationally recognized. It increases the possibilities of fighting and controlling animal diseases and also contributes to a more effective way of using limited means. Wageningen Bioveterinary Research strives for an active participation in national and international collaboration.

In the Netherlands, Wageningen Bioveterinary Research works together with the Department of Veterinary Science at Utrecht University and the Animal Health Service in the ‘Knowledge chain of infectious animal diseases’. As a result, optimum use is made of all of the veterinary knowledge in the Netherlands, ranging from information taken from the field to academic research. Moreover, the separate groups of experts and staff participate in a large and diverse number of international networks. This guarantees that knowledge is used effectively and efficiently and that government and commercial organisations are fully supported in their efforts to combat animal diseases.

Club5/CoVetLab
CoVetLab.org is an acronym for "Collaborating Veterinary Laboratories" and also the name of the website of Club 5, a European communication and collaboration network consisting of five national reference veterinary laboratories. The aim of the collaboration is to advance high quality veterinary science by the dissemination of knowledge, sharing of experience and the transfer of skills and technology between the members, and to enlarge the scientific capabilities.

EPIZONE is the Network of Excellence for Epizootic Disease Diagnosis and Control. This European Union (EU) funded research project officially started on 1st of June 2006 and is supported by the EU’s Sixth Research Framework Programme with a total EU contribution of € 14million for the period of five years.

EPIZONE aims to develop a network of scientists to improve research on preparedness, prevention,detection, and control of epizootic diseases within Europe. Therefore the economic and social impact of future outbreaks of foot-and-mouth disease, classical swine fever, avian influenza, and other relevant epizootic diseases like bluetongue and African swine fever, can be reduced through increased excellence by collaboration.

MED VET NET ASSOCIATION
The activities of Med-Vet-Net have been based around a ´Virtual Institute´ concept. The institute comprises 15 public health and veterinary institutes in 10 countries: Denmark; France; Germany; Hungary; Italy; Sweden; The Netherlands; Poland; Spain and the United Kingdom. Med-Vet-Net officially started on 1 September 2004. Med-Vet-Net is funded for 5 years. The network comprises over 300 multidisciplinary scientists. Zoonotic diseases constitute 75% of the new and emerging diseases worldwide. Food-borne diseases and food production-associated diseases cause many worldwide economic and social problems. Europe is faced with potential threats including avian influenza, Foot and Mouth Virus, West Nile Virus and bluetounge.

NeuroPrion
Network of Excellence dedicated to research on prion diseases

In september 2003 a new European "Network of Excellence" was launched to protect humans and animals against prion diseases. The project NeuroPrion was selected by the European Commission under the Thematic Priority 5 “Food Quality and Safety”.

The overall strategic objective of this research project is to generate new tools for the diagnosis and detection of M. paratuberculosis (Mptb) in animals and animal products; to improve methods for elimination of Mptb from foodstuffs; and to define the risks associated with Mptb and its potential role in Crohn's disease.