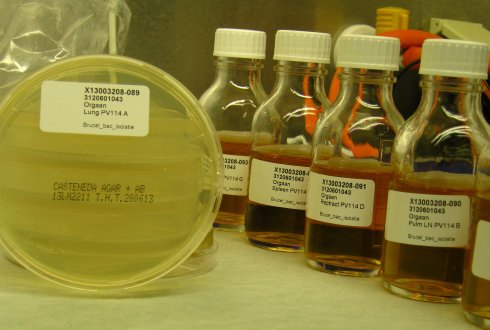 Can infect animals and humans

The disease in animals

The main symptom of brucellosis in animals is abortion or premature birth. The placenta shows typical sources of infection, and if the placenta is not expelled in a timely way, an infection of the uterus occurs that may be fatal to the mother. In the event of abortion, large quantities of bacteria emerge with the offspring, the amniotic fluid and the placenta, resulting in a high risk of infection in humans and animals. Apart from the secretion of bacteria via the placenta, bacteria are also secreted in the milk. Secretion in the milk may be of lengthy duration. Following infection, male animals may become infertile as a result of infection of the testicles. Brucellosis often progresses unnoticed, because there are usually few other symptoms, apart from abortion. As a result, the bacterium may be transmitted throughout a herd without being noticed.

Brucellosis in domestic animals and humans is notifiable in the Netherlands.

Wageningen Bioveterinary Research (WBVR) is the national reference laboratory for Brucella in animals, advises the government on brucellosis and has various serologic testing methods at its disposal.

Wageningen Bioveterinary Research (WBVR) conducts tests for the diagnostics of infectious diseases in animals. Read further on our diagnostics: dog and cat.