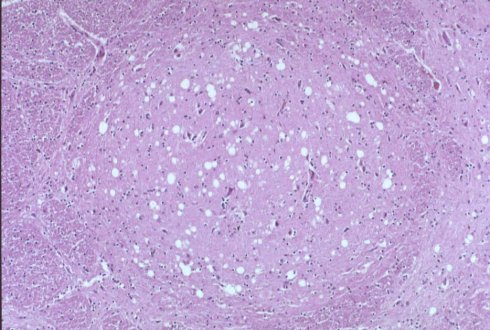 BSE stands for Bovine Spongiform Encephalopathy. It is a disease that occurs in cattle. There are concerns that it may also occur in other small ruminants. Until now, however, only one case of BSE has been detected under natural circumstances in a French goat.

Effects on the nervous system

In this disease, the central nervous system of the animals is affected. Microscopically small cavities develop in the brains of the animals (see photo), which cause behavioural changes (startling, hypersensitivity to light, sound, touch) and movement disorders. The animal will eventually die of the disease.

BSE is an infectious disease belonging to the group of "transmissible spongiform encephalopathies" (TSEs). BSE and other TSEs are caused by prions. Prions are proteins that can deform the normal proteins in the brain. Prion diseases can be caused by infection, but also by small changes in the genes that produce these proteins. Prions are very resistant to heating and disinfection, and are also resistant to protein-splitting enzymes.

It is assumed that the outbreak of BSE was caused by feed concentrates that included insufficiently sterilised meat and bone meal originating from carcasses of sheep or cows that were infected with prion disease. In Great Britain, the processing method for carcasses was changed in the early 1980s, and a second heat treatment with steam was discontinued. Because BSE prions are resistant to high temperatures, they were no longer eliminated during processing, and it became possible for them to contaminate meat and bone meal. This possibly contaminated meat and bone meal was included in feed concentrate for cattle.

It was found that animals contracting BSE became infected especially during their first year of life by eating contaminated concentrate. It is also likely that calves can be infected in the uterus by direct transmission from the mother to the calf. Transmission of the pathogen via the milk from the cow to the calf has not yet been observed. The incubation period (the period between the infection and the first symptoms) is usually several years.

The disease is seen in adult cattle, mainly at the age of three years and older (in the Netherlands the average age is 6.5 years). The disease begins gradually and is therefore difficult to diagnose in the early stages. Usually, the disease starts with behavioural changes, such as seeking isolation, hypersensitivity to noise and other stimuli, after which severity gradually increases. The animal can become unmanageable, can panic and sometimes become aggressive. Teeth grinding and muscle twitching have also been observed. Movement disorders also occur: a swinging gait, hindlimb ataxia, and at a later stage difficulty in turning and frequent falling. Due to progressive paralysis, the disease eventually leads to death. Especially in the early stages, the symptoms of BSE can be easily confused with symptoms of metabolic diseases and other diseases affecting the central nervous system.

BSE and the Creutzfeldt-Jakob disease

It is almost certain that there is a link between BSE and the development of a variant of Creutzfeldt-Jakob Disease (vCJD). This variant of the disease could be caused by eating contaminated organs from cattle (particularly brains) that are infected with BSE. vCJD was first observed in 1996 in Great Britain.

Read more about the Creutzfeldt-Jakob disease

Epidemiological data have clearly shown that BSE spreads primarily through the reuse of animal proteins (cattle proteins) in animal feed. This results in a circular flow of animal material in which pathogens can multiply. This problem was recognised long ago. As a result, sterilisation has become an important part of processing animal cadavers.

Go to the main page about BSE