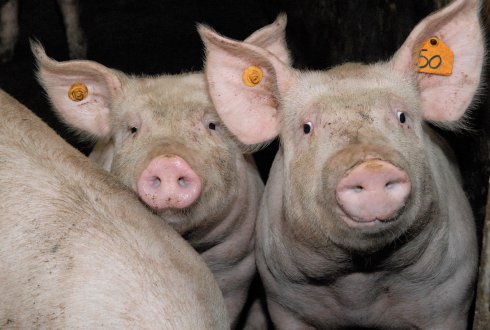 PRRS (porcine reproductive and respiratory syndrome) is a viral disease caused by the PRRS virus (PRRSV).

Porcine reproductive and respiratory syndrome is characterised by abortion, premature birth and high piglet mortality in sows, as well as pneumonia and mortality in weaned piglets and meat pigs. A typical, but less frequent, symptom is the occurrence of blue ears. For this reason, the disease is also known as blue ear disease.

Origin and transmission of PRRS

The disease originated suddenly at the end of the 1980s, virtually simultaneously in the United States and Europe, spreading around the world since then. It was associated with huge economic damage to the pig sector. In 2006 and 2007, South East Asia showed occurrences of infections with a variant of PRRSV, leading to extremely serious problems in pigs, resulting in with very high mortality rates. This variant contains a new genetic mutation that had arisen shortly before.

Since the inception of this disease, researchers at Wageningen Bioveterinary Research (WBVR) have played a significant role in discovering the virus, describing the disease and the development of vaccines.

The reasons for this are varied and complex. One reason is that the genetic composition of the virus is extremely variable, with the result that the virus circulating in the field is able to evade the immunity generated by the vaccine. In this way, several types of PRRSV have arisen, such as the European and the American virus type, with several variants in between. New variant strains are increasingly being described. The new strains increase the risk that they can no longer be combated with the current vaccines.

Another important reason for the inadequate effectiveness of the PRRS vaccines - and this is what the WBVR research focusses on in particular - is the capacity of the virus to evade the immune system. The virus slows the capacity of the immune system to recognise it, to process it and to create a proper response. Our researchers are focussing on investigating these virus strategies with a view to developing a new generation of more effective vaccines.

Pigs can become infected by small amounts of the virus and can then remain infected for long periods, while excreting the virus. The virus can continue to circulate on farms for several years, primarily through the presence of sows that carry it. This means that the virus can hide in infected animals for long periods. PRRS is transmitted largely via direct contact with infected pigs, via humans, infected cattle trucks, farm materials, injection needles, the air, sperm or insects.

PRRS is not a notifiable veterinary disease, such as foot-and-mouth disease or swine fever. Opinion is divided on how to control PRRS. Extremely intensive control strategies have been pursued abroad with a view to halting transmission of the virus on farms and to ensuring that the virus cannot be brought onto farms again subsequently. Control in the Netherlands relies primarily on vaccination. Vaccination can certainly restrict the clinical symptoms of the disease to some extent, but it is not completely effective. Consistent and strict farm management is also important in enhancing the effect of vaccines. How many farms have in fact been able to eliminate the disease after intensive and long-term vaccination is unknown.

Wageningen Bioveterinary Research (WBVR) conducts tests for the diagnostics of infectious diseases in animals. Read further on our diagnostics: other animal species.