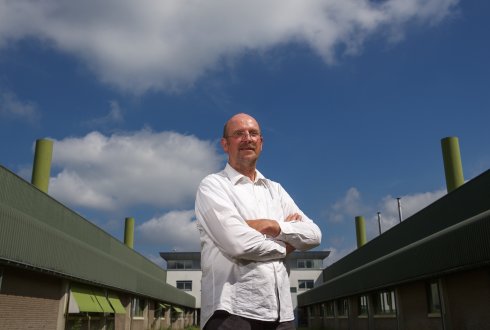 Antibiotic resistance is a complex problem in animal husbandry. Antibiotics are an essential for both veterinary and human healthcare, but the flipside is that their usage can lead to antimicrobial resistance. Dik Mevius, an expert in the use of antibiotics for livestock management, participates in a large European consortium in which he coordinated the collection of samples and farm data as part of research on antibiotic resistance in the food chain, and zoonotic transmission. The consortium of the EFFORT research project was made up of twenty European research groups working together for five years (see box).

Antibiotic resistance is globally a growing problem which affects both humans and animals. Tackling it is therefore a high priority for organisations such as the World Health Organization (WHO), the Food and Agricultural Organization (FAO) and the World Organisation for Animal Health (WAO/OIE).

For their part of the EFFORT project, Dik Mevius and his team at Wageningen Bioveterinary Research (WBVR) coordinated the collection of samples from various animal sources (including chickens, pigs, veal calves, turkeys, wild boar, fish, companion animals and meat) in nine countries, in close collaboration with the Institute for Risk Assessment Sciences (IRAS) at Utrecht University. They also collected data on farm practices, and how farms are managed and make use of antibiotics.

Mevius describes it as a dynamic collaboration with an enthusiastic group of researchers: “Such a large and complex collaboration between 20 research groups from 10 countries has to be based on standardised methods. A lot of data had to be collected, on the quantity and type of antibiotics given to animals, the hygiene standards of livestock keepers, the location of farms and how they run their business. This information was fed into analyses of collected dung samples which revealed the resistance genes (resistomes) found within the animal husbandry sector.”

The first results that where published were on intestinal tract bacteria. The research revealed that the quantity and type of bacterial resistomes present in the intestinal tract varies by animal species and country. This means that further research is needed into the causal factors for each animal species. Higher levels of resistance genes in the resistomes are found in the intestinal tracts of pigs than those of chicks, but at the same time chicks have a greater variety of resistance genes. The results of this research are relevant to humans as well as animals, as humans are exposed to resistomes through the food they eat.

This is just a snapshot: much more data has been collected and analysed, and results will be shared in future publications. Researchers at Ghent University in Belgium have carried out a detailed analysis of antibiotic usage and how it differs by animal species and country. This data is being mapped against the prevalence of E. coli bacteria resistance for each species and country. IRAS is researching how specific farm practices can affect the variance in resistance. Results will also be published on people employed in the food supply chain (such as abattoir workers). This research analysed stool samples of those workers to identify their resistomes and compare them to that of the general population. The objective was to determine the effects of occupational exposure related to employment in the industry.

The use of technologies based on sequence analysis (metagenomic analysis) and the standardisation of DNA extraction and bioinformatics analysis in this research provide a frame of reference for future research and the monitoring of antibiotic resistance.

Within Europe, and specifically the Netherlands, we are fairly advanced in tackling antibiotic resistance. But we still need to be vigilant in guarding against the introduction of antibiotic resistance from different origins and other parts of the world. Preventing the introduction of disease is an important challenge for livestock keepers. It’s therefore also important that the industry limits the use of antibiotics to when it's really necessary, and maintains good standards of hygiene and biosecurity.

In November 2018 the researchers present the results of their work. High-impact speakers including Louise Fresco (food and agriculture expert and President of the Wageningen University & Research Executive Board) and Mark Woolhouse (professor of infectious disease epidemiology at the University of Edinburgh) will share their vision on the development of global agriculture and the impact of responsible antibiotic use. More information on the EFFORT conference (in English).

EFFORT research project – Reducing the use of antibiotics

EFFORT stands for Ecology from Farm to Fork Of microbial drug Resistance and Transmission.

The EFFORT project researched the impact of human, animal and environmental exposure to antibiotics. Its focus was on understanding the eco-epidemiology of antimicrobial resistance of animal origin. The EFFORT project is coordinated by Jaap Wagenaar, professor of clinical infectiology at Utrecht University and a senior researcher with WBVR.

The research spanned a five-year period with 20 partners from 10 different European countries. The results of the research have provided an insight into the consequences of antibiotic resistance in the food chain in terms of the health and wellbeing of animals, food safety, and economic impacts. These results can be used to inform policy decisions and help set priorities for risk management in the food supply chain as a whole.