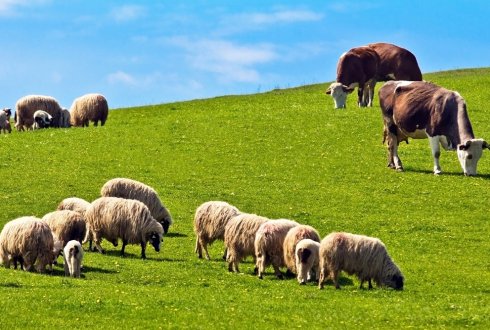 On Thursday, 28 February 2019, the 'One Health' debate will take place in The Hague. This debate is the conclusion of the Castellum research programme: a public-private partnership aimed at developing vaccines against zoonoses. The project has resulted in a new vaccine against Rift Valley fever virus (RVFV).

Wageningen Bioveterinary Research (WBVR) has developed and tested the vaccine for safety and efficacy at its laboratory and animal facilities, where it is possible to work safely with zoonotic infectious diseases.

As a first step, WBVR tested an existing RVF vaccine, which is already on the market in Africa. The vaccine proved to be very effective, but was unsafe for pregnant sheep. A new vaccine was therefore developed within the Castellum programme.

The new vaccine is a live-attenuated virus that protects sheep, cattle and goats against RVF after a single administration. The vaccine also proved completely safe, even for young animals and during pregnancy. Furthermore, the vaccine is inexpensive to manufacture, which is particularly important for the market in Africa. The vaccine is currently being evaluated in additional studies that are required for registering the vaccine in Europe.

The basic idea underlying the Castellum programme is 'One Health', which means that the prevention and control of infectious diseases in the animal population ultimately provides the best protection for human health. However, since the new RVF vaccine has proven to be not only highly effective, but also extremely safe in various animal species, researchers are currently investigating whether the vaccine can also provide direct protection for humans.

Consequences for humans and animals

Zoonoses are infectious diseases that are transmitted from animals to humans, such as avian influenza, Q fever and Rift Valley fever. These infectious diseases can spread very quickly in areas that are densely populated with humans as well as farm animals. More than 60 percent of all recently discovered infectious diseases of humans have their origin in animals. Zoonoses can therefore be harmful to both animal health and public health, and can cause serious social unrest, for example when infected animals have to be culled to prevent further harm. To combat zoonoses effectively, the Netherlands needs more fundamental and applied knowledge about these diseases, along with a high-quality infrastructure to develop vaccines against emerging infectious diseases.

In the animal facilities of WBVR, it is possible to study zoonotic infectious diseases caused by bacteria and viruses. The facility is secured with advanced technology to prevent dangerous viruses and bacteria from spreading to the environment. In addition, employees of WBVR are well protected against the pathogens due to the operational methods and safety protocols.

The High Containment Unit (HCU) houses the only laboratory and animal facilities in the Netherlands with 'Veterinary BioSafetyLevel 4' level (vBSL4) certification. This is mandatory for working with highly contagious animal diseases such as foot-and-mouth disease and swine fever. Some of the laboratories and animal facilities at WBVR are also certified at the 'human BSL3’ level, which is mandatory for research into the prevention and control of infectious diseases that are contagious for humans as well as animals.

The Castellum programme focused on research into new vaccines for animals to prevent the introduction and spread of zoonoses. The goal of the public-private partnership was to make at least one vaccine available for the market, and this goal was achieved.
In 2019, the Netherlands Centre for One Health (NCOH) is launching a new Innovation Programme that is funded by the Top Sector Lifesciences and Health. The new programme is also based on a public-private partnership in the field of One Health. The One Health debate on 28 February 2019 will focus on scientific, organisational and administrative insights that emerged from Castellum programme. Relevant themes for the new Innovation Programme will also be discussed.

In addition, as one of the partners within the Netherlands Center for One Health, WUR will investigate how we in the Netherlands can be better prepared for infectious diseases transmitted by mosquitoes. The NWO has allocated an amount of almost nine million euros in research funding in 2019, supplemented to ten million by contributions from public organizations that participate in the research.

Read more about the Castellum project: