Sinterklaas (Saint Nicholas) already arrived in the Netherlands, and chocolate letters are flying off the shelves in preparation for the traditional 5 December celebrations. 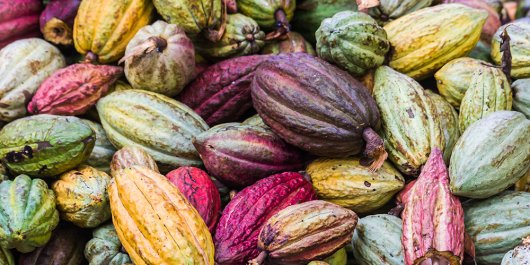 Much of the average of 2.2 kilos of chocolate eaten per person in a year will be consumed during these dark winter days. The Green Sinterklaas-campaign started in 2009 led to an estimated 99% of the chocolate letters being certified sustainable in 2012. So, the chocolate letters are ‘green’, but ever wondered what’s behind certified chocolate? LEI Wageningen UR has been monitoring the chocolate that’s consumed in the Netherlands. Around 25% of all chocolate products sold here in 2012 were made from certified sustainable cocoa. The term certified sustainable includes schemes such as Fairtrade/Max Havelaar, Organic, Rainforest Alliance and UTZ Certified, all members of International Social and Environmental Accreditation and Labelling Alliance (ISEAL). These schemes seek to monitor, demonstrate and measure, using independent audits from producer to retailer, that cocoa has been produced and processed taking into account environmental impacts, biodiversity conservation, economic viability for farmers and in a socially responsible way.

More than 40 companies, NGOs and research organisations in the Dutch cocoa sector, together with the Dutch government teamed up to improve sustainability in the cocoa chain in 2010, publically committing themselves in a Letter of Intent 'Sustainable cocoa consumption and cocoa production. They want to increase the share of certified sustainable cocoa used in cocoa and chocolate products consumed in the Netherlands still further to 50% in 2015, 80% in 2020 and 100% in 2025. This ambitious target should help ease consumer consciences that they are eating responsibly.

Maybe while you’re drooling over that chocolate you’ll pause to think about what these certification schemes mean for farmers who produced the cocoa beans. For example, since 2008 over 44,000 farmers have started the process to become UTZ certified in Ivory Coast, which produced around 35% of cocoa produced in 2013. Generally these are poor farmers with on average 4 or 5 hectares of land. You are not alone in wondering. Major players in the Dutch cocoa sector, like UTZ Certified, IDH, Cargill and Solidaridad have also asked how farmers benefit from such certification schemes and the sustainability initiatives they have introduced. Initial studies indicate that certification contributes to farmers’ knowledge and implementation of good agricultural practices. Farmers are generally satisfied with certification and sustainability initiatives, believing they have added value for them. Production volumes and yields appear to increase slightly, and maybe due to the training in good agricultural practice which accompanies certification – but not all farmers experience increases and factors other than certification, such as agricultural inputs and favourable weather, also influence production.

Farmers participating in sustainability initiatives such as UTZ and IDH programs in West Africa receive almost 5% higher price due to certification premiums. However, farmers’ incomes are generally insufficient to lift the average cocoa farmer’s family out of their poverty. Certification also costs farmers and their cooperatives time and money, much of which is not fully accounted for. There is room for improvement. Yields can be more than doubled by improved agricultural practices, replanting improved cocoa varieties and clever use of fertiliser, pest and disease control inputs and credit aid farmers to finance such activities. Novel ways to reach the estimated 4 to 6 million small holder farmers with services to improve their cocoa are increasingly being implemented by mixes of public, private and research partnerships, often accompanied by certification. These developments in combination with steadily rising global demand for chocolate, consumer’s growing willingness to pay for sustainable chocolate and paying farmers a higher price to cover the real costs of producing cocoa in an environmentally and socially sustainable way, could make a difference. Then those chocolate letters might taste even better.