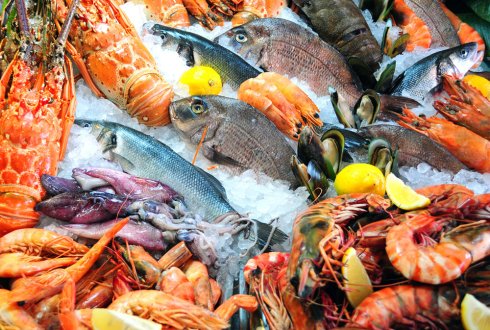 All the Dutch flags blowing in the breeze ensured that visitors to the recent Seafood Expo in Brussels were fully aware of the prominence of Dutch fish businesses at the three-day event. Geert Hoekstra, Sander van den Burg and Maggie Skirtun – all researchers with the Aquaculture and Fisheries Group at Wageningen Economic Research – visited the Seafood Expo from 7 to 9 May. The expo is the world's largest event dedicated to the trade and processing of fish products. Hoekstra and Skirtun then went on to take part in a workshop in Zaragoza run by FAO on 'Seafood Value Chain Analysis' from 13-17 May.

The researchers spoke to many fish processors and traders, and got up to date on the latest trends and developments. According to Hoekstra, these include various obstacles for fishers on the North Sea: windmills impinging on their space, the need for more selective fishing due to the implemented landing obligation, the ban on pulse fishing, and the looming impact of Brexit. The latter could lead to a closure of British waters, where some individual fisheries enterprises earn 80-90% of their income. Based on previous research carried out by WUR, we know that on average 35% of the landings made by Dutch cutters comes from British waters. For the large Dutch pelagic trawlers, it's as high as 60% of their landings on average. Hoekstra says:

'These obstacles mean that we're becoming increasingly dependent on fish from outside of the Netherlands, primarily other EU member states, including Norway for salmon and Asia for farmed fish. Fish is imported to the Netherlands where it is processed and then exported, having been packaged by a Dutch processor or trader. Substitution is on the increase: the market is replacing Dutch fish with species that don't live in our own North Sea.'

Fish is becoming increasingly scarce as an 'unprocessed raw material', according to Hoekstra. Global demand for fish outstrips supply. One fish trader told Hoekstra that right now, purchasing channels are perhaps more important than sales channels. The scarcity of unprocessed fish makes sourcing a key concern. For the Netherlands, Europe is still the most important sales market, accounting for 81% of exports. Hoekstra has also noticed extensive supply chain integration in recent years, which is increasingly an outcome of global upscaling by businesses:

'Many trading companies with financial buffers are now buying up other supply chain participants. This includes fishing companies as well as processing and trading companies. Previously there were maybe 300 individual companies, and in another 10 years there may just be 150.'

Meanwhile, global consumer demand for fish is on the increase, mainly due to its 'healthy' profile and because of the diversity of seafood varieties available to consumers in developed economies. In emerging markets and major fish-consuming parts of the world, such as Asia, increased consumption is driven by population growth. According to FAO figures, average consumption per capita was 9kg in 1961, and by 2016 it had grown to 20.5kg. Fish consumption increased by 3.2% annually across those 55 years, while the population increased by 1.6%. It's expected that by 2030 fish consumption will increase by another 20% compared to 2016.

The Seafood Expo also included a focus on the production and consumption of seaweed. Wageningen Economic Research is running a Seed Money Project in which it is exploring the potential for collaboration between Dutch and Chinese seaweed businesses. The visit to the Seafood Expo led to some useful contacts, but also provided an insight into the latest developments around product development and sustainability certification in the global seaweed supply chain.

Following the seafood expo in Brussels, the trip continued to Spain. In Zaragoza, FAO hosted a workshop on Seafood Value Chain Analysis for both early career and more experienced researchers. The workshop was related to the European Commission's ambition to achieve 'zero waste'. At present, at least a third of all fish caught (measured by weight) goes to waste. Value Chain Analysis (VCA) isn't a new tool, but it's very useful for analysing the entire supply chain in order to get a clear idea of the points where losses could be reduced and what the impacts are for companies (economic losses) and consumers (food waste). VCA provides an insight into the value added to fish products by all stakeholders, from the fisher to the processor, wholesaler, retailer and so on. This enables fishers and producers to analyse how they can improve their business models and how they can build consumer engagement with the product.

The workshop broke up into groups to look at where various fish species are sourced from. Hoekstra and Skirtun were in a group with researchers from Iceland, Norway, France and Belgium, focusing on the cod market in Spain. This meant looking at the sourcing of cod, the landing price, margins and so on. Armed with data from FAO and Spanish universities, such as auction and export prices from the country of origin, they went to a supermarket to make comparisons with the prices in the shop.

Much of the cod in Spain is sourced from overseas, mostly from Norway and Denmark, and according to Hoekstra there's an opportunity to create much more profit through the use of branding. For example, it was difficult to work out from the packaging where the fish had been caught. Hoekstra says:

'Once a fish has been processed into a fillet is often difficult for consumers to see what kind of fish it is and what the story behind the product is. If you want to stand out in the market, it's important for every party in the supply chain to carry the same message and values. A strong brand can help you to further differentiate yourself and tell a unique story. Branding is barely used, even though there is so much competition.'

VCA also provides an insight into the extent to which end consumers are engaged with the origins of their food. By way of example, Hoekstra says:

'The Spanish are far more engaged with and passionate about their food than the Dutch. In the Spanish restaurant and catering sector it's particularly noticeable that locally caught fish and fresh vegetables feature prominently in gourmet dishes.'

Plastic packaging is a problem

The lecture given that week by a professor in Seafood Marketing from Norway got Hoekstra thinking about alternative packaging for fish and other food products:

'We need to look at how we can reduce the use of plastic in the near future by using alternative packaging materials or by processing fish on the spot so that it can be transported in its own natural packaging: its skin.'

WUR known for its close collaboration within the 'Dutch Diamond'

Spain closely monitors import and export prices and volumes. Through the workshop presentations and feedback from other participants, it became clear that WUR is highly regarded for its economic data. Hoekstra says:

'At WUR we have a lot of expertise on the fish sector through our close collaboration with the government as well as fisheries enterprises, fish processors and fish traders. We call this the golden triangle or the 'Dutch Diamond'. Some other countries don't have that kind of collaboration at all. I think this does mean that we stand out compared to other institutes when it comes to seafood.'