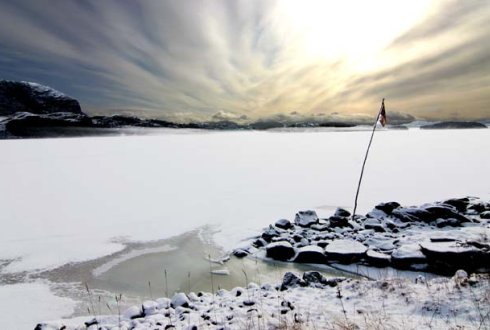 The Environmental zone Alpine North covers medium and low mountains and uplands in Scandinavia. Climate of western slopes is strongly influenced by the North-Atlantic current, meanwhile eastern uplands are influenced by continental air masses. The growing season lasts in average 130 days (116-155, low); sum of active temperatures is in average 1416° (1277° - 1719°, low).

The northern part of this zone is located within the structural region of Archean Folding, but changes in the west to folded structures of Caledonian origin. The underlying rocks consist of acidic and intermediate Pre-Cambrian in the south, lower Pre-Cambrian in the north and Cambrian-Silurian formations in the west. The Varangerhalvøya belongs to undifferentiated Baykalides. The area is underlaid with Cambrian-Siluarian rocks that change to Upper Pre-Cambrian in the North. The Quaternary formation consists of colluvial and diluvial-colluvial sediments, except the North dominated by moraines (Salpausselkä stage).

Quaternary deposits are represented by moraines in the east, and diluvial-colluvial and colluvial deposits in the west. The eastern part of the area in Norrland and eastern segment in Manselkä is dominated by pediment upland plains and low mountains changing to block highlands of the Scandinavian mountains.

The higher parts reach up to over 2400 m The mountains are heavily eroded by Quaternary glaciations; abrasional and accumulative forms of mountain glaciation (cirques, troughs, terminal moraine) dissected by subsequent erosion have common occurrence.