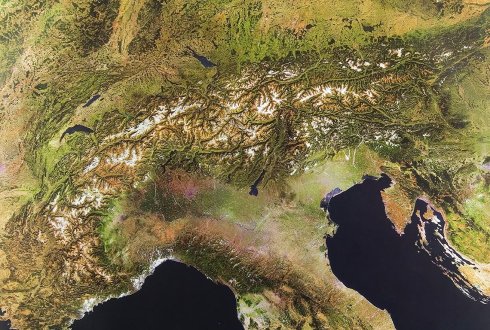 The Environmental zone Alpine South covers high, medium and low mountains of Central and Southern Europe. Most of them belong to the Alpine orogenic belt (Pyrénées, Alps, Carpathians, Tatr and mountains of the Balkan peninsula) or to Hercynian Europe (Schwarzwald, Thüringer Wald, Harz, Etzgebirge and Sudety) and, respectively, are classic Alpine landscapes with deep, relatively inaccessible valleys and permanent snow cover on the highest peaks, or low mountains and uplands.

The climate and vegetation vary greatly from west to east and also depend on the orientation of slopes. The growing season lasts 220 days (middle), the sum of temperatures above +10°C is 3005°C (low).

In the central Alps the geological structures mostly belong to the lower tier of Alpine structures; in East Alps there are outcrops of Paleozoic structures involved to the Alpine orogenesis. The composition of rocks is complicated: West Alps are dominated by Triassic and Jurassic, Mesozoic (undifferentiated) and Carboniferous and Permian formations; East Alps by Middle Pre-Cambrian+Lower Palaeozoic. The Quaternary formation mostly consists of colluvial deposits. Major ridges are uncovered outcrops of pre-Quaternary rocks. Diluvial-colluvial deposits in the outer and colluvial-proluvial deposits in the inner Alpine zones dominate the Quaternary complex.

The geological structures of the northern Alps contain: Triassic and Jurassic + Permian and Triassic (northern periphery) deposits in the west, Triassic, Silurian and Middle Palaeozoic deposits in the east, Middle Pre-Cambrian-Lower Palaeozoic and Middle Palaeozoic in Niedere Tauern, Triassic in Karawanken (south-east), and Middle Pre-Cambrian-Lower Palaeozoic in Alpi Lepontine (south-west). Schwarzwald, Thüringer Wald, Harz, Etzgebirge and Sudety are Hercynides the outcrops of Pre-Cambrian structures; Rhön originates from a fault in the mantle of Epi-Palaeozoic platform; the Carpathians are Alpine structures. The mountain ranges of the outer Carpathians and Tatra belong to the Alpine folding. Other mountains are Hercynides.

The Carpathians and Tatra are underlaid by deposits of Palaeocene and Eocene age, Sudety by Carboniferous and Permian deposits with large intrusions of acidic and intermediate Palaeozoic rocks, and Fichtelgebirge by Triassic and Carboniferous deposits. As everywhere in outer zones of mountain regions, Quaternary deposits are represented by diluvial-colluvial, in Western Carpathians also by colluvial-proluvial deposits.

The Böhmerwald,Tatra and Carpathians are block folded high and medium mountains. Fichtelgebirge is structural step-like upland area. These mountains are modified by erosional and erosional-accumulative forms; Fichtelgebirge is an area of periglacial loess and loess-like rocks.Southern Schwarzwald is built up by Triassic deposits and acidic and intermediate Palaeozoic intrusive rocks, Thüringer Wald (axial zone) by Permian deposits (undifferentiated), Rhön by Triassic, Harz by Carboniferous and Devonian with acidic and intermediate Palaeozoic magmatic rocks, West Ertzgebirge by Ordovician and Silurian with Palaeozoic intrusions. Palaeocene, Eocene, and Oligocene dominate in the west Carpathians, Palaeocene, Triassic and Cretaceous rocks in the south-east, Triassic, Permian in the south-west. The Quaternary deposits in Carpathians Harz and Schwarzwald are represented by colluvial-proluvial and colluvial deposits. The highest ridges in the Carpathians are outcrops of pre-Quaternary rocks.

Also the central Part of the Pyrenees and the Massif cental have an Alpine character The Pyerenees are underlaid by Devonian and Carboniferous rocks, Eastern by Ordovician and Silurian. The western ranges of Maritime Alps by Cretaceous, Triassic and Jurassic rocks, the ranges in the east by Carboniferous, Permian and Mesozoic (undifferentiated). The Dolomites and Alpi Oróbie have Triassic formations. In Pyrenees the dominating Quaternary sediments are diluvial-colluvial.