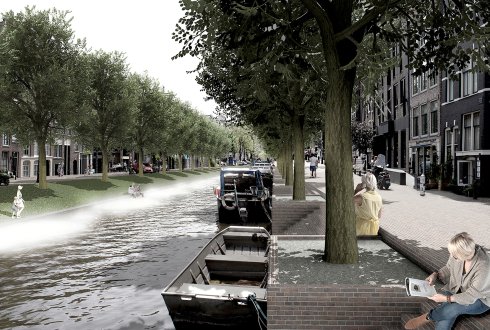 Urban bodies of water are elements in urban design for water storage, water transport, beautification, etc. However, they can also play a role in preventing issues with overheating in cities, as indicated in the research project REALCOOL. This project offers easy to implement, virtual design prototypes for use by urban planners and landscape architects.

It was often assumed that small urban bodies of water, such as ponds or canals, have a cooling effect. However, the REALCOOL project (“Really cooling water bodies in cities”) concludes that the actual cooling effect of small urban bodies of water on the air temperature is quite small. The project also shows that urban design measures (such as shade cast onto the water by trees) have little effect on the water temperature. But other actions can be taken in relation to the bodies of water in order to cool the surrounding area.

The potential for creating cooler urban water bodies by implementing specific design strategies has been determined, such as:

1.   increasing shadows cast by trees to generate shade for people;

2.   allowing air to flow as freely as possible;

3.   introduction of water fountains and misters.

The combination of these measures will lead to a local drop in temperature of between 1 and 10 degrees in physiological equivalent temperature (PET) at the hottest time of day. Additionally, the proximity of water has a psychological effect: it causes people to feel cool.

REALCOOL has created prototypes that depict how these measures can be spatially combined with urban bodies of water. The prototypes are 3D animations of urban design and its bio-meteorological effects. Designers can find guidelines in the prototypes regarding the types of interventions, dimensions, tree profiles, the relationships between interventions, and the bio-meteorological effects. These are not inflexible, prescriptive tools, but conceptual frameworks that support the design process. The prototypes work as “half-finished products” and it is up to the designers to creatively convert them into final designs.

REALCOOL brought together a team of experts in the areas of bio-climatological urban design, urban meteorology, water-atmosphere interactions, and 3D-visualisations from Wageningen University and the Amsterdam University of Applied Sciences. The design experiments were assessed for their cooling effects by experts and micro-meteorological simulations. Professionals from urban design offices, from municipal design departments and the RIVM assessed parameters that are often used in urban design, such as aesthetical appeal, functionality, costs, maintenance requirements, and health effects, and designed solutions in collaboration with the REALCOOL team.

The prototypes can be found at this website: http://climatelier.net/projects/research/realcool-really-cooling-water-bodies-in-cities/