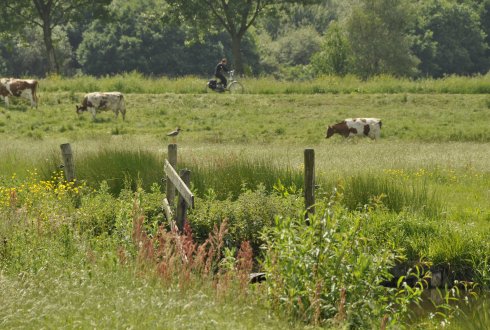 Farming for Nature envisions integration of agriculture and ecology by means of an extensive farming system. Manure is turned into a scarce resource on the farm, drainage is reduced and landscape elements are brought back. The farmer is compensated financially on the basis of a long-term agreement. This concept has been tried out on a dairy farm in the Biesland polder (province of Zuid-Holland) and on two sheep farms and a farm with suckler cows on the Twickel estate (province of Overijssel).

Farming for Nature is aimed at enhancing farmland biodiversity, improving water quality and enhancing landscape quality, by healthy farm enterprises. In 2001, Farming for Nature was introduced by Alterra (currently Wageningen Environmental Research) as a vision for rural development. It departs from the idea that farmers are well-equipped to create conditions for the biodiversity that traditionally accompanied farming. In particular, this applies to the landscape elements of the old cultural landscapes, the biodiversity of grasslands and arable fields, the former ‘outfields’ such as heather and remote, infertile or wet pastures. When managed as ‘natural areas’, these habitats are in general relatively expensive to manage, because they require more labour than ‘wild’ natural areas.

The farmer uses and shapes the landscape

In addition, such biodiversity is the product of extensive farming systems and the functionality of the landscape. Outfields and tree hedgerows used to have a function as part of a mixed farming system with both cattle and arable production. Meadows and pastures were needed to provide manure for the (mostly higher) arable fields. In lowland dairy farming, reed and coppice wood were useful, and the grassland close to the farm were managed differently from the more remote grasslands. This is how cultural landscapes and accompanying biodiversity evolved. Therefore, a farming system in which different land use types have a function, can contribute to sustainable landscape development, by creating gradients from wet do dry and from fertile to infertile.

Farming for Nature is a designed, extensive farming system that is being tested on pilot farms. The farming system is based on no-input of manure and feed from outside the farm, reduced drainage and 10% ‘unproductive’ landscape elements (including the already existing elements). The nutrient cycle is the mechanism through which a balance evolves in the amount of grassland, arable land, unfertilized land (landscape elements, field margins, outfields) and number of cattle. Because in peat areas arable production is not always possible or sustainable, an alternative farming system was designed for such landscapes in which a limited import of feed is allowed, in exchange for the export of manure. Both alternatives make manure a scarce resource and therefore stimulate the harvesting of biomass from landscape elements and outfields, restoring their functionality.

In Farming for Nature, the integration of agriculture and ecology is more profound than in regular agri-environmental management: the whole farm is involved and farming is by definition extensive because of the wetter circumstances and the scarcity of manure. The profound adaptation of the farming system and the landscape determines the course of farm development for the long-term.  Because of this strategic aspect, Farming for Nature aims for long-term agreements (30 years). However, Farming for Nature also deviates from nature management by specialised organisations, because it links biodiversity to the production of food and emphasised the role of farmers in the evolution of biodiverse cultural landscapes.

In 2008, four farms in the Netherlands started to work according to Farming for Nature. These are Hoeve Biesland (dairy, clay and peat, in Zuid-Holland) and three farms on the Twickel estate (sand) in Overijssel: Landerije de Bunte (sheep), Erve Loninkwoner (sheep) and Erve Bokdam (suckler cows and sheep). In the preparation, various parties were involved and instruments and plans needed to be developed. The regional authorities and the State brought together the necessary funds. The pilot could start after a state aid procedure with the European Commission. Already since 2002, researchers were involved in both areas in process development and in monitoring.

The various publications are brought together on this page.

Farming for Nature, how does it work and what does it do. Executive summary synthesis report 2013