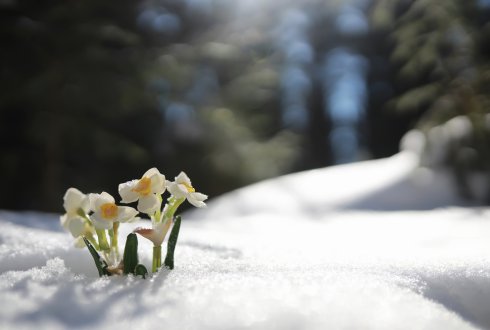 A global study led by Crowther Lab and co-authored by Wageningen University & Research, finds climate change is increasing the risk of late-spring frost in areas where plants are not adapted to this kind of temperature swing. This puts some forests of Europe and Asia at higher risk of damage. The study is published in scientific journal Proceedings of the National Academy of Sciences.

Increased warming in early spring is causing leaves to emerge on trees earlier in the year. Recent estimates show this advance in leaf-out could be as much as two weeks on average through the rest of the century. Early leaf-out puts trees at greater risk of severe damage from late-spring frosts, as young leaves are more vulnerable to freezing. The new study shows that the occurrence of such late-spring frosts is increasing.

The most dramatic risk increase is in areas where late-spring frosts were infrequent: coastal and eastern parts of Europe and East Asia. In those areas, many local trees are “opportunistic,” and leaf out after just short periods of warming. This suggests that climate change will lead to a mismatch between late-spring frost incidences and trees’ strategies to cope with frosts. Therefore, researchers expect that 35% and 26% of the European and Asian temperate forests will become increasingly vulnerable to spring frosts in the future.

lobal warming is associated with excessively hot weather and summer heatwaves. However, climate change will exacerbate all kinds of extreme weather and cold snaps are not to be disregarded. In March 2017, a cold snap killed half the iconic cherry blossoms in Washington, DC which had emerged early following an unseasonably warm February. That same year, an unprecedented warm period induced vegetation to spring out in western Europe before a late-spring frost in April. This frost event caused severe damage to natural and cultivated plants, which altogether led to an estimated 3.3 billion euros of economic loss, of which only 18% were insured, according to MunichRe.

The reduced photosynthesis resulting from leaf damage also contributes to an increase of carbon in the atmosphere. Damaged trees do not absorb as much carbon.

The new big-data study analyzed hourly temperatures around the world over a 60-year period and mapped nearly 1,500 species for their susceptibility to frost. Pairing annual frost occurrences and plant characteristics at the global scale allowed researchers to forecast the vulnerability of forests to late frost events under climate change.

The maps show that these cold snaps are generally more frequent in North America than in Europe and Asia. This is mainly due to the absence of east-west mountain ranges in North America allowing warm spells from the Gulf of Mexico and cold spells from arctic regions to move across the continent unimpeded, resulting in high short-term temperature variability.

The study also finds that many trees in areas historically prone to spring frost risk, like North America, have invested in certain protective measures. These “cautious” trees do not leaf out unless they have experienced enough warmth. This caution provides a valuable insurance policy against frost damage which can affect their growth, reproduction and survival.