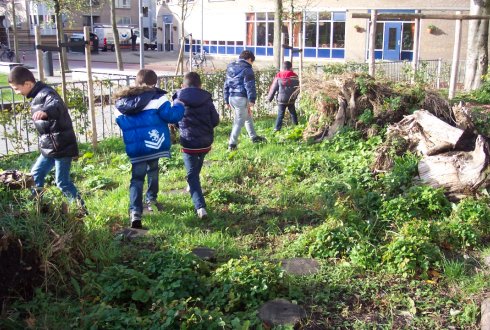 The aim of the project is to determine as best as possible the effect of green redesigns of schoolyards in deprived areas (currently largely ‘gray’ tiled landscapes) on a number of aspects: well-being, development (multi-facets) and attitude to nature. The green redesign can take place in different ways, with potentially different effects. The aim of this multi-year project was therefore to include at least four schoolyards requiring redesign in this study. The secondary objective of this project is to ensure a greater societal impact of the research results, particularly in terms of similar initiatives concerning schoolyards.

The results of the pre-assessment were moderately optimistic concerning the effects of the redesign. For example, children who find the current yard more attractive can concentrate better after the morning break (in the schoolyard) and are more positive at that moment than children who find the yard less attractive. Children who indicate that they play outside quite often are also more familiar with nature than children who say they do this less often. If we assume that the redesign will make the schoolyard more attractive, especially for those children who currently find the yard unattractive, these children may then also be able to concentrate better after the break and may even be more positively disposed. Likewise, assuming that after the green redesign, playing in the schoolyard will encourage more contact with nature, then those children who play relatively little outside at the moment would feel more at ease in or with nature. In the first post-assessment, only two of the four intervention schools showed a demonstrable effect in the social climate in the schoolyard (relative to the control school). In the second post-assessment a year later, the well-being of the children at the same two schools turned out to be marginally higher. In addition, at one school, where the new schoolyard also seemed to be the most used, a somewhat more positive attitude to nature was observed in a number of sub-aspects. Thus, a successful redesign seems to indeed be able to produce positive effects. ‘Successful’ in this case means: a yard that is judged more positively by the children after the redesign than before. An important side note is that the new yards are not only greener, but also larger and more varied in terms of play options. Which part of the transformation is most responsible for the positive effects can not be determined with certainty. As far as the unsuccessful redesigns are concerned, a number of causes seem to contribute to this. First, the schoolyard must be resistant to the playground mayhem during breaks (without too many restrictive measures). In addition, it also helps if popular forms of play in the old yard can still be carried out well in the new yard. Finally, it seems important to (through child participation) ensure that the expectations that were created can be followed through on. This is where interim cuts can really throw a spanner in the works.