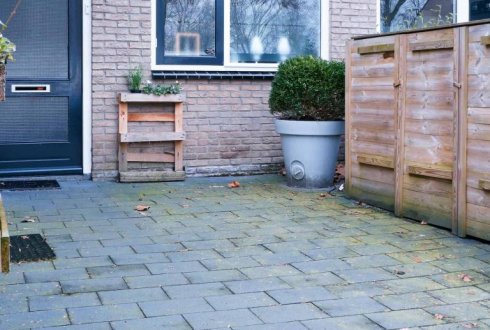 Our climate is changing. Increasingly we are dealing with enormous downpours, heat and periods of persistent drought. Heavy rain showers cause flooding. Drought and heat cause damage to infrastructure and lead to low groundwater levels. When citizens pave their surroundings such as gardens, this prevents water from sinking into the soil, builds up heat and has negative effects on the social well-being and health of humans, animals and nature. Therefore, 'greening' of gardens and public space in the cities is of utmost importance.

In the Netherlands, municipalities take measures to reduce petrifaction of public space. However large areas of cities are privately owned and consist of fashionable stone, maintenance-free gardens. Municipalities have no legal influence to govern these privately-owned properties.

Operation ‘Stonebreak’ has been established to make private individuals aware of the consequences of stone garden and convincing them to replace tiles by green. Operation ‘Stonebreak’ is an initiative from pioneers in academics and municipalities that wanted to gain public awareness and support. Through this support, ‘Stonebreak’ organises campaigning boots at garden centres and festivals, neighbourhood campaigns to persuade citizens to give a tile and to receive a plant in return, or national television gardeners to market the green garden.

Since 2015, over 20% of Dutch municipalities and 20% of the Dutch waterboards joined operation ‘Stonebreak’, as did nine national foundations, one province and over 80 municipalities from all over the Netherlands.

View examples of our research