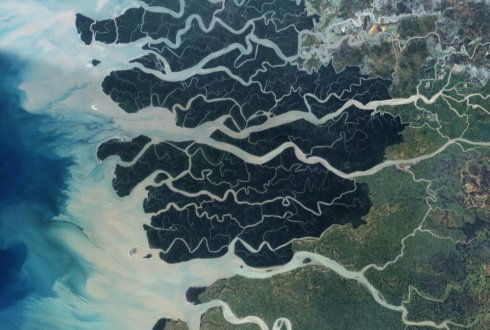 A team of scientists from the universities of Utrecht and Wageningen and the USA found that delta areas worldwide have gained land in the past 30 years, despite river damming. The researchers have published their findings in the prestigious scientific journal Nature.

A significant driver of land gain is deforestation that has led to soil erosion and increased supply of sediment to many deltas. However, recent land gains are unlikely to be sustained throughout the 21st century with expected accelerated sea-level rise.

River deltas rank among the most economically and ecologically valuable environments on Earth. People living on deltas, however, are increasingly vulnerable to sea-level rise and coastal hazards such as major storms, extremely high tides, and tsunamis. Many deltas experience a decline in sediment supply due to upstream damming, making them even more vulnerable. However, large scale upstream deforestation resulting in soil erosion has increased the amount of sediment that is transported to many deltas.

The relationship between the sediment deposited by rivers, oceanographic forces of waves and tides, and delta shape has remained poorly understood. An international group of scientists from The Netherlands and the USA have developed and applied a novel model that can calculate how much different drivers, both human and natural, influence delta shape. This allowed them to determine the influence that humans have had on delta shape. Over 10.000 deltas worldwide, ranging from small deltas to mega-deltas, have been investigated. The availability of global satellite imagery allowed them to test their new model. The study was funded by the US National Science Foundation and the Dutch Research Council, NWO.

Dr. Jaap Nienhuis, geoscientist at Utrecht University and lead author, says: “Based on satellite imagery, we have found that deltas globally have gained land over the past 30 years. A large driver for these gains turned out to be human action. 25% of delta growth can be attributed to upstream deforestation. Deforestation results in soil erosion and increased sediment delivery to the coast. Human action such as damming causes sediment starvation and increased importance of wave- and tide-driven transport, which can change delta shape.”

Andrew Ashton, geologist at WHOI and a coauthor of the paper adds: “Applying this novel prediction of delta shape to thousands of global examples allows us to quantify how delta shape affects change—for example when sediment supply diminishes, deltas dominated by waves tend to erode yet tide-dominated deltas continue to grow."

A quarter of delta growth can be attributed to upstream deforestation. Deforestation results in soil erosion and increased sediment delivery to the coast.

With the expected accelerated sea-level rise, however, recent land gains are unlikely to be sustained throughout the 21st century. The next step is to use the new model to make predictions of future delta change. Understanding how waves and tides modify river deltas will be critical for anticipating future change, both locally and globally.

The study has been funded partially by the US National Science Foundation and the NWO Vici grant of Ton Hoitink from WUR.

The first author of the article, Jaap Nienhuis, is a former Postdoc, who carried out research with a WIMEK grant at the Hydrology and Quantitative Water Management Group in Wageningen.

Photo: NASA
The Ganges-Brahmaputra-Meghna Delta increases with about five square kilometer each year during the last 30 years.