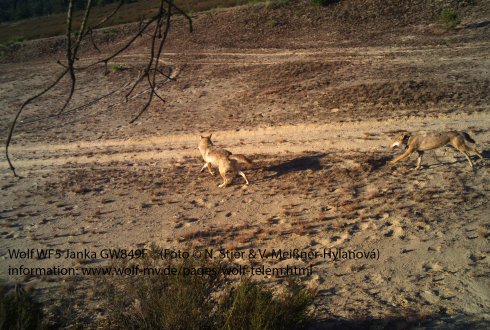 A second wolf has taken up residence in the Veluwe national park, as revealed in a monitoring study by Wageningen Environmental Research on behalf of BIJ12. In all, there were six wolves in the Netherlands in the period 1 February to 1 May 2019, including one in Limburg.

Their presence here is demonstrated through DNA analysis, mainly of wolf droppings collected by volunteers from Wolvenmeldpunt. Potential wolf droppings are easy to recognise. They are usually more than 25 cm long, 3 cm wide and they contain a large quantity of easily visible wild animal hair and bone remains. DNA analysis has shown that three-quarters of the droppings found were indeed from wolves. The remaining droppings came from a fox or a dog. A separate DNA profile is created for every wolf dropping in order to determine which individual it has come from and where that individual has spent the past few months.

Settling in the Central Veluwe

DNA analyses of multiple wolf droppings has established that the female wolf, GW960f, was still in the Central Veluwe at the end of April, six months after the first observation. This six-month period means that she is the second wolf, after another female wolf (GW998f), to have officially settled in the Netherlands. In the past three months, a red deer shown to have been killed by wolf GW960f, has also been found. This prey, an adult hind, is many times heavier than the wolf herself. “Wolves specialise in hunting ungulates (hoofed animals) that are many times heavier than they are,” says researcher Hugh Jansman. “But they tend to hunt as a team. This wolf is alone. She appears to have captured her prey by driving it into a fence.”

After an absence of more than 150 years, wolves were first reported as having made a return in February. The wolf in question (the female GW998f) continues to inhabit the North Veluwe. At the end of January, the male GW893m was also reported for the first time in the same area. Research shows that in the subsequent period, the male has been present in the female’s territory on at least eight occasions. This makes it highly likely that they have formed a pair. Formally, this is only the case if the male inhabits the same area as the female for six months, but we cannot rule out that they have since mated. The next few months will reveal whether there is a prospect of cubs being born.

Also DNA was taken, by or in assignment of BIJ12, from sheep killed at various locations in Overijssel and Drenthe. Analyses at Wageningen Environmental Research then reveal whether the sheep were indeed killed by a wolf. The analysis are carried out within a month of the DNA sample being taken. A description of these instances and the DNA results are available on the BIJ12 website. For the purposes of individual identification, a genetic profile of these animals is then created every three months. No DNA from the three wolves living in the Veluwe has been found in any of the samples.

Dead sheep were found in Lemerlerveld in Overijssel in late February. DNA research has shown that the sheep were killed by the female GW965F from the ‘Lucie’ pack in Lower Saxony. “We know where this wolf comes from because we exchange information via the CEwolf consortium with the Senckenberg research institute in Germany,” explains genetic researcher Arjen de Groot. “That’s also how we know that this wolf was detected a month later near Westernkappeln in North Rhine-Westphalia. This matches the pattern that we have seen so far in the Netherlands. Wolves that have been spotted in agricultural areas often keep on going and soon cross the border again, unless they reach a more closed-in area like the Veluwe.”

A number of deer and wolves in Germany were fitted with a GPS transmitter in order to study the impact of wolves on deer. Wolves with a transmitter are given a name and their DNA is taken for a DNA passport. At the end of March, the Dresden University of Technology reported that one such wolf, Janka (GW849f), was in the Netherlands. Janka, a female from the Ueckermünde pack some 600 km from the border, is the second wolf in this study to be observed in this country (after Naya in early 2018). Hugh Jansman: “Unfortunately, Janka’s transmitter battery failed after just two days. Her DNA has been identified on sheep killed in Hooghalen, but since then there has been no sign of her.”

Another wolf in Limburg

Wolf droppings were found in the Meerssen region of Limburg at the end of March. Because of the poor quality of the sample, it was impossible to determine which individual was involved. “The location of this wolf is unique, given that wolves have never been sighted in this region,” says Hugh Jansman. “A lot of activity was observed recently in the neighbouring areas of the Eifel in Germany and the Hoge Venen in Belgium.” 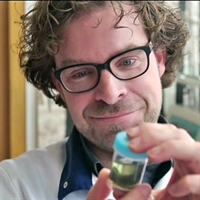 Do you have a question about wolves? Ask our expert: drs. HAH (Hugh) Jansman
Contact form + Show more (1)

Photo: Janka (equipped with a transmitter) with another member of her pack in her parental territory in Ueckermünde (© N. Stier & V. Meißner-Hylanová, TU Dresden)