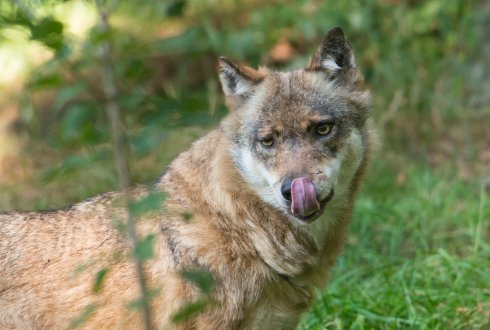 Wageningen Environmental Research (WENR) is commissioned by BIJ12 and the Provinces to do a monitoring survey every three months. Two new female wolves and one female that had been seen earlier, were spotted in the period August till November. The other seven wolves that had been spotted earlier in the past year, were not observed any more. This brings the total number to ten, of wolves spotted in the Netherlands until November 2018: six females and four males.

WENR published messages before, stating that eight wolves appeared to have been in the Netherlands, based on genetic research. This was concluded from DNA-samples, collected in the period January till August 2018. Recently the analyses of DNA-samples from the period August till November 2018 were completed. The samples came from DNA of droppings, that might be from wolves. These were supplemented with DNA taken from bite wounds of attacked sheep. An overview of the individuals with the locations and dates on which these were found, is given in the figure below:

The detection of the fact that wolf GW998f was still present in the past months, could be made up via droppings, collected by Wolves in the Netherlands (WIN). This female wolf originates from the pack at Babben in Brandenburg (DE), ca. 600 km off the Dutch border. She was detected firstly in Friesland in May in the last year and was subsequently retrieved on the basis of droppings in Drenthe and samples of bite wounds of sheep in that province and in Overijssel as well, while she was spotted on the Veluwe at the end of July. In the period from 6 August till 15 October, five wolf droppings were collected in that region, of which on the basis of DNA it could be determined these were hers. Ecologist Hugh Jansman of WENR: “Albeit that she attacked sheep in Drenthe and Overijssel earlier, it sticks out that her DNA has not been found with any of the reported wounded sheep since she was spotted on the Veluwe. We can assume that she has been feeding exclusively on wildlife in the recent time.

Two droppings, also collected on the Veluwe by volunteers of WIN on respectively 29 August and 2 September, appeared to be from another female wolf. The genetic profile of this wolf has been compared to profiles of German wolves in the database of Research Institute Senckenberg. Geneticist Arjen de Groot of WENR: “This indicated that it involved the female wolf GW960f, who had already been observed near Göhrde (Lower Saxony,Germany) in January 2018. She stems from a pack near Göhrde, which is around 400 km away from the Veluwe".

This is the first wolf in the Netherlands to have been observed exclusively by DNA from droppings. Other wolves could be labelled initially on the basis of DNA of victimised sheep. “This underlines the importance of good monitoring that is directed on faeces also and possibly wild prey”, says Hugh Jansman.

This wolf, nor her pack, are labelled in the CEwolf databank and therefore she should still be given a permanent number. It has been determined, that she has wounded or killed sheep in seven cases at several locations of Drenthe and Overijssel in the period between 3 and 18 October 2018.

In the same period attacked sheep have been reported in Heino and Den Ham (Overijssel). That these had been attacked by a wolf, could be determined on the basis of DNA, but this sample was of such a low quality that it was impossible to blame GWxxxf , or any other specific wolf.