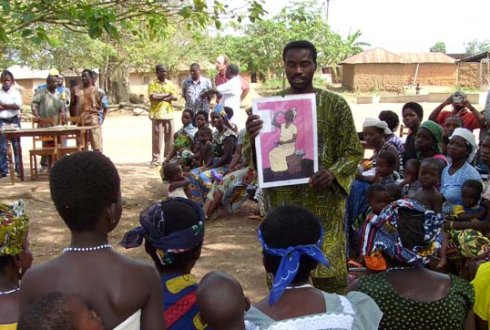 In support of Plan Nederland’s Food and Nutrition Security Project, CDI provided technical expertise and facilitated the process of shared learning through the formulation of learning groups in different countries.

Having the people involved in the pilot countries experiment actively with the new approach is the best way to develop an integrated way of working. If they can then reflect on their experiences, they will develop new understanding and insights. Centre for Development Innovation (CDI), Wageningen UR was responsible mainly for providing technical advice throughout the course of the trajectory. The Royal Tropical Institute (KIT) became a project partner in 2007, contributing to the development of the learning approach.

Visits to pilot countries were stepped up in 2007. Of the seven countries involved in the FNSSP, four pilot countries were chosen for intensive guidance: Bangladesh, Benin, Indonesia and Nicaragua. The primary aim of the project is that people learn, individually and from each other in groups, how they can improve their food security. An additional objective is that the pilot countries exchange knowledge and experience with each other. Two global conferences for the seven FNSSP countries held in Benin (2006) and Bangladesh (2008) are the first tangible result of this. A third objective is to stimulate the concept of learning within Plan International itself.

One of the central elements of the learning approach is the formation of ‘learning groups’ consisting of ten to fourteen people who are closely involved in the implementation of the food security project. These groups applied the action learning approach by first jointly formulating a question whose answer they believed would positively impact the project’s progress.

CDI focuses on two kinds of ‘learning’ in each country. The primary focus is on the functioning of learning groups within the national food security programme. Besides this, attention is also devoted to learning at the organisation level: how can Plan as an organisation at national level facilitate learning so that ultimately Plan itself operates in a more effective and result-oriented way?

The FNSSP project finished at the end of 2010. As part of its rounding off, CDI staff visited the pilot countries together with their colleagues from Plan Nederland and KIT. During these visits they assisted the learning groups further in the process of achieving successful interventions.