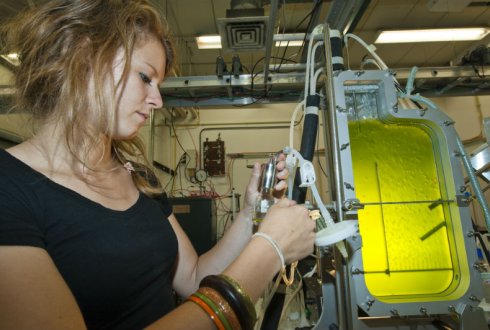 Development of sustainable and cost-effective production of biodiesel from microalgae.

Improvement and optimization of  algae oil production methods by:

Microalgae are promising producers of raw materials for sustainable fuels. They have relatively high growth rates while producing oils that can be used for biodiesel. However, producing and harvesting oil from algae is still not cost effective, and energetically uneconomical.

Algae oil production involves two steps. First, algae biomass is produced under optimal growth conditions. Then algae are put on a nutrient-restricted diet, resulting in increased oil production in the algae cell. Subsequently, the fat algae can be harvested. A disadvantage of this method is time loss during algae growth.

An alternative method is to harvest algae biomass from a growing algae culture on a slightly nutrient restricted diet. This system avoids time loss, but oil content is relatively low. Optimizing this system could be a big leap forward in more cost-effective oil production.

Two microalgae species Phaeodactylum and Nanochloropsis will be cultured. Important metabolism routes and genes involved will be studied in order to understand and control the process of algae oil production. The optimal balance between sufficient growth and sufficient oil production will be assessed.

Production of biodiesel from algae tri-glycerides

Oils will be extracted using existing methods, adapted specifically for algae.  Different oils for different purposes (nutritional supplements, biodiesel) will be separated, while oil composition will be optimized for the production of biodiesel.

This project is an EU project coordinated by Wageningen UR.

This project was conducted on AlgaePARC, where cost-effective and sustainable microalgae production methods are developed outdoors.