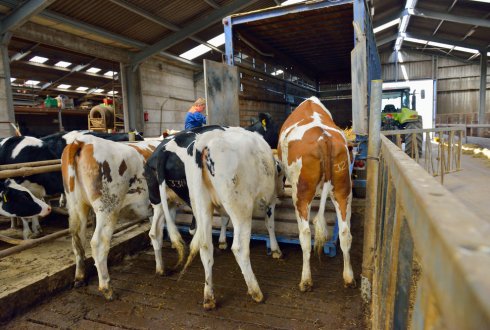 Animals are transported both nationally and internationally for slaughter and breeding. There are laws and regulations regarding animal transport to ensure animal welfare. Sometimes things go wrong, however, and these mistakes appear in the headlines of newspapers. Animals get injured, are too hot or cold, or do not get enough rest and opportunities to eat and drink.

When it comes to animal welfare during transport, the circumstances just before transport are important as well, meaning when the animals are selected and put aside, loaded into the vehicle and unloaded at the place of destination.

Wageningen Livestock Research develops and validates methods to improve, increase transparency and guarantee the welfare of animals before, during and immediately after transport. We also performs field tests to measure animal welfare in the developed methods.

Thousands of animals are daily transported within Europe and to other countries. Transport conditions during these journeys vary a lot. To support the industry (e.g. farmers, drivers) to improve animal welfare, a consortium of 16 partners has started to develop 'Guides to Good and Best Practice'. This is a European Commission, DG Sante pilot project. Wageningen Livestock and Economic research are partners in the Animal Transport Guides project. The Guides will involve guidelines for cattle, horses, pigs, poultry and sheep transport, with the aim to finish around the end of 2018.

In the European project Control Post, protocols were developed that assess the welfare of animals which are unloaded at control posts and slaughterhouses through specific parameters. The aim of this project was to develop a certification system for carriers/transporters at a European level. Wageningen Livestock Research coordinated the development of protocols for measuring animal welfare, especially during unloading. The species that were included in this project are pigs, cattle, horses and sheep.

Criteria for fitness for animal transport

This project is linked with the Control Post EU-project. In this project, animals are evaluated upon arrival at a control post (after a transport of 24 hours or more) and before leaving for the next destination. The idea behind this project is that the degree of fitness of animals before departure partially determines the state of the animals at the end of the journey, and that animals with different fitness experience various degrees of disadvantages under the same transport conditions. Protocols have been drafted to assess the level of fitness, and these are tested in practice. Besides the results of animal assessments of the Control Post projects, data on emission-animals  in the Netherlands will be collected. This project focuses on cattle and pigs.

In the Animal Welfare Checkpoints project protocols were developed and tested, which provide insight into the welfare of animals for slaughter during the process from primary works (readying for transport) up to the slaughterhouse. The protocols have been developed on the basis of the Welfare Quality® system and are specially focused on transport (including loading and unloading of the animals). The protocols were developed and tested for poultry, cattle, pigs, sheep and goats.

Driving and rest times during transportation of heifers

This project examines the effects that rest under optimal conditions has on the welfare of heifers during long-distance transportation. The following is meant by optimal conditions: enough time to eat, rest and drink, the animals have plenty of space and the climate can be adapted. To assess animal welfare, both behavioural and physiological measurements are performed during a number of long-distance transports to France.