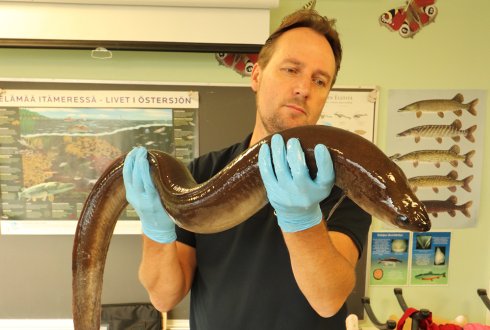 For the first time in history, scientists have observed a spontaneously matured female European eel. She was caught in 2002 and has since lived in the Finnish aquarium house Maretarium in Kotka. Researchers of Wageningen University & Research have, together with colleagues of the Natural Resources Institute Finland and the Maretarium, studied the eel to gain knowledge on the natural process of sexual maturation. The gained insights will contribute to the closing of the production cycle of eels in aquaculture. The information is also very important for conservation of the natural population.

Spawning in the Sargasso Sea

At the end of their life, European eels migrate from the European freshwaters to the Sargasso Sea to reproduce. When they leave the continent, they are 5 to 50 years old but still pre-pubers. After a 5 to 6,000 km swim trip, they reproduce and die afterwards. Two day old larvae have been caught in the Sargasso, to date still the most convincing evidence that reproduction should be occurring there. Naturally matured eels have never been caught, in the Sargasso Sea or elsewhere. In captivity only by long-term hormonal treatment eels can be matured artificially.

The spontaneously matured eel was a 43 year old female, stocked as a French glass eel in the Finnish Lake Vesijärvi in 1978. She was part of a batch of twelve eels that was re-caught again in 2002 and which was then transferred to the Finnish Maretarium in Kotka. Last summer this eel increased her belly size as a sign of the oocyte hydration response that occurs during the final stage of sexual maturation. Finally she died at a length of 114 cm and a weight of 3.3 kg with most oocytes having overripened but without having released any. The remaining eels will be closely monitored for progressing maturation.

Eel aquaculture and conservation of the natural population

Eels can be reproduced artificially by hormonal injections in captivity but the larvae die before they feed. “In Wageningen we can produce larvae weekly” says researcher Arjan Palstra of the Eel Reproduction Innovation Centre, a collaborative R&D initiative between Wageningen Livestock Research and the sustainable eel foundation DUPAN. “But what always has been lacking was a natural reference for the process of sexual maturation in eels. And that is important as the quality of the eggs and larvae that we produce could be improved.”

With the newly gained insights, the researchers expect to be able to improve the protocols and develop ways to naturally mature eels. And that will contribute to closing the production cycle as eels still cannot be propagated. But the information is also very important for management of the natural population and conservation of this iconic fish.

Photo: Arjan Palstra with one of the 43 year old eels, © Pauline Jehannet