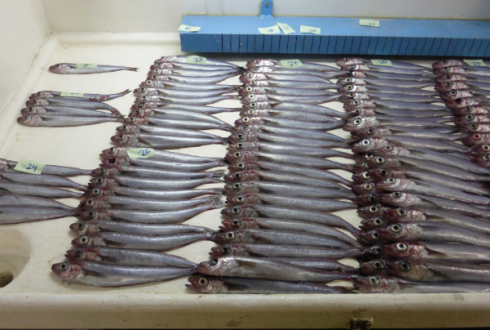 Bram Couperus, Dirk Burggraaf and Thomas Pasterkamp of Wageningen Marine Research will join the Dutch part of this year’s blue whiting acoustic survey in spring 2019. The researchers keep a blog about their findings and experiences.

The cruise track that will be covered by the Dutch research vessel Tridens is given in orange on the map below. It represents the EU part of an internationally coordinated effort to estimate the size of the blue whiting stock west of the British Isles. The area will be surveyed on a systematic, predefined cruise track.

During the survey, we continuously send out vertical sound waves through the water and collect acoustic backscatter data. We can visualize these data in a so-called ‘echogram’ – essentially a 2-dimensional slice through the water column. Once we have completed the survey of the area, we combine all the echo energy that was reflected by blue whiting and convert it into fish numbers and weight.