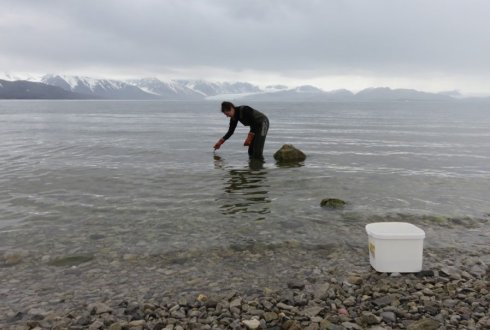 In April 2018 the Svalbard Environmental Protection Fund awarded the project ‘Aliens on the beach’. This project will be conducted by experts from Wageningen Marine Research, Wageningen Environmental Research, UNIS/Akvaplan-niva and IOPAS.

Marine alien species can be inadvertently transported to Svalbard on ship hulls, in ballast water, on equipment or clothing, or even on floating debris (sometimes natural, but more often discarded waste). Svalbard is increasingly visited by people through shipping, ecotourism, and scientific expeditions. An increase in human visits to Svalbard can therefore mean an increased risk of introducing marine alien (non-native) species.

Beaches provide easy access to land-based activities, and are where floating debris can be washed up. This makes the beaches of Svalbard a likely entry point for marine alien species. However, some beaches are more at risk than others. Along with the amount of human visitation, several environmental factors are likely to influence the probability that marine alien species will 1) arrive, and 2) establish a population on a beach. Knowing what type of beach is present is essential to be able to predict what type of alien species are likely to be able to live there.

For example, the type of substrate available on a beach plays an important role in determining whether a species can live there. Rocks provide anchor points to attach to (for species like algae and barnacles), and shelter to hide in (for species like crustaceans and fish). Sandy beaches, on the other hand, are more exposed to the elements and to predators, and are therefore hospitable only to species that can bury themselves (like worms or some shellfish), or are very small (like diatoms).

At present, there are only biological descriptions of beaches on Svalbard along the southern coast, , while human activities occur all around the archipelago. To be able to assess ecological changes, and the impact of human activities in this remote region, it is important to possess baseline information covering beaches all around Svalbard.

In August 2018 scientists of WMR, UNIS/Akvaplan-niva and IOPAS will travel to Svalbard. A number of beaches around Svalbard will be studied, including some frequented by tourists, and some rarely visited. At each beach, basic environmental characteristics will be recorded to describe the beaches. This will be complemented with information on dominant species living in and on the beach using both traditional and innovative techniques (eDNA analysis). Also, debris that has washed upon the shore will be examined.

During one of the expeditions, we will be in regular contact with locals and tourists. This will provide us with an opportunity to communicate with, and educate the public on the risks of introducing marine alien species through ecotourism, and how best to avoid doing so.