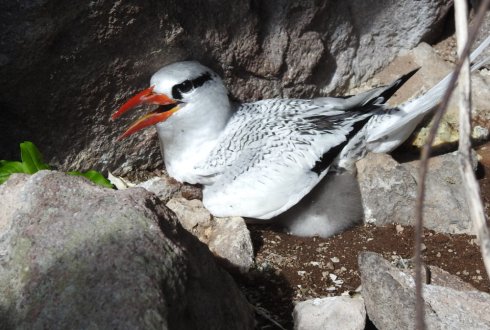 Marine biologist Mardik Leopold of Wageningen Marine Research and independent ecologist Michiel Boeken recently spent four weeks studying and ringing red-billed tropicbirds on Saba. The islands’ local population is under threat from cats and rats. New data showed a dramatic decline in the number of breeding pairs in colonies along the south coast of the island.

Boeken studied these birds in 2011/2012 in the same colonies, where they nest in crevices in the rocks. Now, eight years later, Boeken and Leopold documented changes in the population size. Monitoring is important so that measures to counter the population decline can be taken.

Leopold and Broeken counted the number of breeding birds on the entire island, as well as measuring eggs and monitoring the development of hatchlings in three colonies. By comparing data from 2019/2020 with data from 2011/2012 on egg size and the growth of the hatchlings, they showed that the drop in breeding numbers is not the result of a change in the supply of forage fish.

During the months December and January, the researchers monitored approximately 150 occupied nests in three colonies on Saba. In two colonies along the southern coast of Saba (‘Great Level’ and ‘Tent’), the number of breeding pairs had dropped from several hundred to just a few dozen. In the largest colony, Old Booby Hill, situated along the east coast, the number of breeding birds appeared unchanged, at 700-1000 breeding pairs. However, on the plus side, the birds persisting on the southern side of the island are producing chicks again, while in 2012 not a single hatchling lived past four days, due to predation by feral cats. An intervention to cull the number of cats has proved successful. On Old Booby Hill, the predation by feral cats was always less than in the southern colonies but has increased, while eggs were also lost to rats.

Cats are a huge threat

The researchers ringed a total of 200 adult birds and hatchlings of suitable size. They also analysed the different types of tropical fish on the birds’ menu. These birds’ staple food consists of flying fish, but other species of fish were also found. Hatchlings remain in the nest for three months, until they are able to fly. The fact that the nest is positioned on the ground makes eggs and hatchlings vulnerable to rats and feral cats. Particularly the cats form a huge threat, making it a priority to curb the population of feral cats as much as possible to conserve the unique colonies of red-billed tropicbirds on Saba.

Over 35 per cent of the Caribbean population of this tropicbird species is based on Saba and neighbouring Sint Eustatius. The breeding population on these two Dutch-Caribean islands make up 17% of this species’ global population. Adult red-billed tropicbirds have very high site fidelity, and by default return to the location they laid their first egg. Exchanges between colonies are very rare and have never been observed between these two islands, in spite of the extensive ringing of birds on both Saba and Sint Eustatius and the small distance between these two islands (26 km).

However, only a few young birds have been ringed, and within the population, these are probably most likely to wander to other colonies. Thus, the degree of genetic isolation is still unclear. Should the exchanges between the different colonies be as the ringing data suggest, the red-billed tropicbird would be very vulnerable to local extinction, as recently happened to the white-tailed tropicbird on Saba. According to Leopold, the possible isolation of the birds on Saba presents a big risk; “As a logical follow-up, I would like to study how genetically isolated the birds really are. That will allow us to estimate the risk of rat and cat predation better.”

Leopold and Boeken collaborate with the Saba Conservation Foundation (SCF) and the Public Entity Saba and are planning to record their findings on Saba in a scientific article. They carried out the research on their own initiative. “Very little is known about these birds. Therefore, more research is needed. We hope to be able to monitor these special birds through Wageningen University and take the next step in their conservation,” says Leopold.