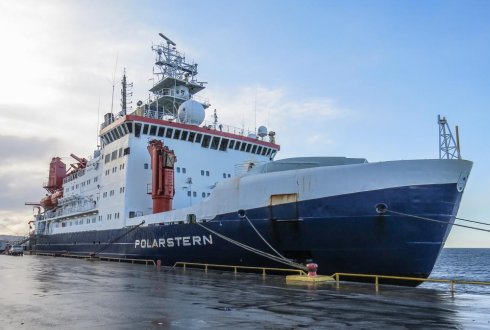 A large group of IMARES staff sails on board the German Research Icebreaker ‘Polarstern’ for investigations in the sea-ice areas of the Weddell Sea. The expedition sails from Cape Town (2 Dec 2014) to the German Neumayer Station (Christmas), through the centre of the Weddell Sea to Punta Arenas in Chile (1 Feb 2015).

The largest Dutch team on board Polarstern is formed by participants in the ICEFLUX project. ICEFLUX is a cooperative program between the Alfred Wegener Institute (AWI) from Bremerhaven, Germany, and IMARES. The Dutch membership in the ICEFLUX group consists of Fokje Schaafsma, André Meijboom, Bram Feij, Michiel van Dorssen en Jan Andries van Franeker. The German ICEFLUX group, also 5 persons, is led by Hauke Flores, formerly also working at IMARES, but nowadays leading a group of young scientists at AWI and initiator of the big ICEFLUX project.

ICEFLUX aims to gain knowledge on the importance of sea ice for the functioning of polar ecosystems. It encompasses a broad range of connected subprojects that vary from physical sea ice properties, ice algae, and the importance of such algae for the subsequent levels in the food-web from small zooplankton to ultimately the top level of birds, seals and whales. Such knowledge is indispensable in the light of climate change and management of a growing fishery on Antarctic krill.

Two further IMARES colleagues on board the same voyage of Polarstern are Steve Geelhoed en Hans Verdaat. They work as whale observers in a team of ITAW (Institute for Terrestrial and Aquatic Wildlife Research uit Büsum, Duitsland). The research concerns a highly detailed survey of distribution and abundance of whales in the sea ice zone, in particular that of the Antarctic Minke Whale.

Finally, two further IMARES investigators, Elisa Bravo Rebolledo en Piet-Wim van Leeuwen depart for Punta Arenas in Chili at the end of December. From there, the Chilean Antarctic Institute (INACH) will arrange transport to their research station on Cape Shirreff (Livingston Island, South Shetland Islands). The study concerns the distribution of marine debris down to the most distant regions on earth and will include counts and sample taking of especially plastic debris on the beach and in coastal sediment, entanglement of Fur Seals and the collection of seal faeces for detailed analyses of presence of microplastics in relation to their diet. This is the second season of this study: recently the INACH bulletin published an article on this project.