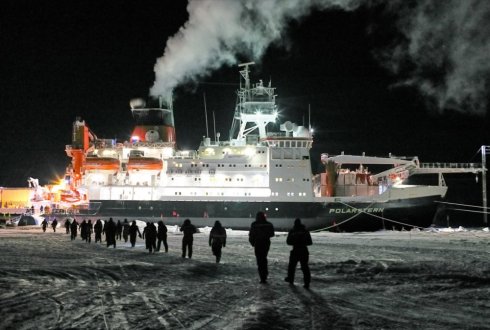 While we are dealing with the bizarre situation at the home front, the research vessel Polarstern is still drifting close to the North Pole in the Arctic Ocean. After some delay, Wageningen Marine Research colleague Serdar Sakinan arrived on board for the continuation of the scientific work on leg 3. Here the collection of samples continues in sometimes very creative ways. Further challenges are caused by the changing conditions of the ice floe on which the scientific work is being done. In addition, current travel restrictions resulted in the prolongation of leg 3 which means that scientist and crew have to stay up north.

Also for this leg, people and supplies were exchanged with the Russian icebreaker Captain Dranitsyn. Although the ship managed to get close to Polarstern, due to the tremendous navigational skills of the captain, the journey was long because of heavy ice conditions. After three weeks the icebreaker reached the zone of thick multi-year ice. Progress had been slow, and there were indications that Polarstern could not be reached due to a lack of fuel. However, on 28th of February, Captain Dranitsyn was finally close enough for the exchange to begin. As the ships were lying on the same ice floe, the transfer of people could take place on foot, using sleds for heavier cargo. Around the same time, a second Russian icebreaker left port to meet up with Captain Dranitsyn to supply fuel for its return home.

Serdar Sakinan, researcher at Wageningen Marine Research, is continuing the collection of zooplankton samples, fish samples and distribution data. One of the questions within the MOSAiC expedition is the role of ice algae in the Arctic Ocean food web. The algae growing on the underside of the ice are a potentially important food source for small marine crustacea. Amphipods are among these species thriving on the ice and are in turn a food source for polar cod.

Serdar and his team members are collecting smaller sized amphipods with plankton nets, but collecting the larger ones is a challenge. However, they have been observed continuously in the ice holes by the physical oceanographer colleagues working in Ocean City and the sea-ice physicist's colleagues working at the ROV site. Therefore, Serdar asked for their help, and this started a competition between the sites. During the past week, they have been getting a few amphipods each day, which were preserved for the Wageningen Marine Research project. The last winner of the amphipod sampling competition is the Ocean City 3-1 against the ROV site.

Movement of the ice floe

Changes in the movement of the ice floe that harbour the sites, like Ocean City and the ROV site, has caused problems as a new lead and new cracks developed. This profoundly restricts the areas where the scientist can go on the floe and leaves certain parts inaccessible. In addition, the FishCam, which is used to collect data on the distribution of fish species in the Arctic Ocean by taking pictures, was disconnected. As the camera was located dangerously close to the lead, several researchers worked for multiple days to get it back through the heavy ice. This was right in time as the dynamic processes of the ice continued to disrupt the floe.

Prolongation leg 3 due to the corona virus

At this moment leg 3 was supposed to be at an end. However, due to corona virus related travel restrictions the new group of crew and scientist can not be brought on board. This is why the exchange is postponed and the people currently on board of Polarstern are forced to stay longer. Read about Serdar Sakinan’s reaction to the sitiation.

Do you have a question about the MOSAiC expedition? Ask our expert: dr. FL (Fokje) Schaafsma
Contact form + Show more (1)

Lead photo: People that arrived at the Central Arctic Ocean on the Russian icebreaker Captain Dranitsyn are walking towards Polarstern to start their time on board to do scientific research (© Michael Gutsche).