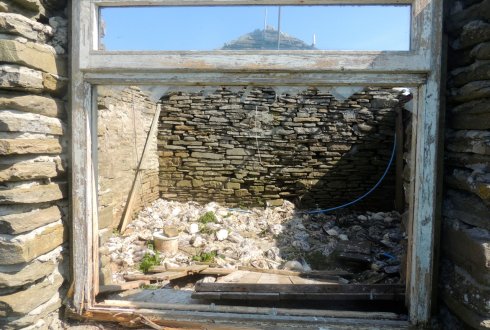 In May 2016 a sad discovery was made on the Orkney Islands. In an abandoned croft, a mass grave of fulmars was found. Attempts to renovate this house had been abandoned three years earlier. Windows and doors had been put in place, but not a roof. In the main room of the house, a few living fulmars were moving around on the mass grave of close to 500 conspecifics!

Fulmars are true masters of flight, but not good in take-off. They need a cliff edge to take off, or at least a flat stretch of land or water which they can use as a runway to gain lift, just like an airplane. They can never escape from a small and closed space surrounded by walls 2 meters high.

How then did the fulmars come into the house? Most fulmars only start breeding around 10 years of age. However, before that, they spend many years of ever more intense searches for a suitable partner and nest site. Usually they do so on steep cliffs, but occasionally they search nesting places on or around stone walls of e.g. sheep pens. In this case some youngsters started displaying on the stone wall of the house and went in to prospect the place. Their cackling noises or their visibility to others passing by must have raised curiosity to a continuing sequence of other prospecting birds.

Most of the corpses were in a serious stage of decay. Thanks to our experience with beached fulmars, we were still able to assess sex and age 84 birds from the internal organs. In 48 females the developmental stage of the ovary and oviduct indicated ages of several years, but without ever having been breeding. Immature males are less easy to distinguish in different stages, but also in males non of them was in breeding condition.

Of course we have studied the plastics in the stomachs. The stomach was still intact in 117 corpses. About 91% of these contained some plastic, in an average number of 9 particles and mass of 0.085 gram per individual bird. That figure is lower than what we normally find in fulmars from the Orkneys. The difference may be explained by the fact that in this case healthy birds got locked in without any food. They slowly starved, possibly over periods of several weeks during which the grinding and breaking up in the muscular gizzard continues. The birds we normally study usually have been able to continue feeding to some extent (including on plastics), or died quicker.

Birds still alive were offered a route for escape by breaking the window, and placing a wooden shelf providing access to the windowsill (Photo: Tim Dodman)

An article on this sad event was published in the journal of the Scottish Ornithologists' Club. The journal is not available online, but we have permission to provide a pdf of the article: Branscombe, J., Dodman, T., Van Franeker, J.A. & Bravo Rebolledo, E.L. 2019. Fulmar deaths in a building on Papa Westray, Orkney. Scottish Birds 39(2): 132-135.