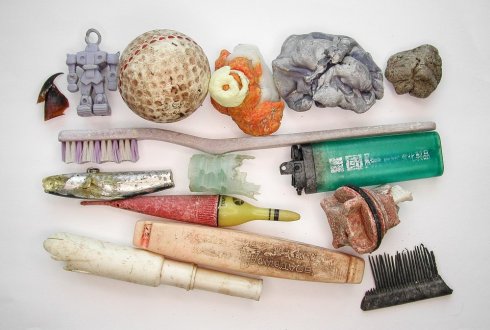 Species of all sizes and habitats have been found with plastic in their stomachs. Also entanglement in ropes and other plastic objects is regularly documented. In a recently published article, all these observations have been summarized by Susanne Kühn and Jan van Franeker. Currently, 915 marine species can be encountered on that list.

The first account of litter ingested by a marine organism is almost 90 years old: In 1931 an American scientist recorded a tiger shark with horse shoes, metal cans and rope material in its stomach. The first items made of plastic were found in 1962 in stomachs of Leach’s storm petrels. The first entanglements were recorded by the same American scientist In 1931, he found a shark entangled in a rubber car tyre and a few years later, in 1938 he encountered a cod fish that was stuck in a metal can. Since then, many more reports on these occasions have been published, the current review article summarizes and analyses the results of 747 studies.

In a review article from 1997, 276 species were encountered with either plastic entanglement or ingestion. In 2015 this number increased up to 558 species and the current study has found 914 species with entanglement or ingestion records. For ingestion, 701 species have been documented, including 180 seabird species, 69 marine mammals species, again all turtle species, 363 fish species and 82 species of invertebrates. For entanglement, the number of species is 354, the current study lists 112 seabird species, 49 marine mammal species, all seven turtle species, two sea snakes, 101 fish species and 83 species of invertebrates.

Earlier research focused on mainly seabirds, turtles and marine mammals. More recently, plastic has been found in many fish species around the world. The reason for this increase is not necessarily an increase of plastic ingested by fish but more likely the growing interest in fish by science and society.

Are all species similarly affected by plastic ingestion?

The growing number of species does not say anything about potential negative effects within different species. Caused by the great interest of the society, more attention is paid to search and find plastics in different species, consequently leading to an increasing number of species with plastic. In the current research, it appears that mainly the procellariform seabirds, including albatrosses, petrels, shearwaters, fulmars and storm petrels, are found with plastic in their stomach.

Out of 144 Procellariiformes, 63% have been encountered with ingested plastics. Globally, at least 23,000 of these birds have been studied and almost half the them (9500 individuals) carried some plastic. Many of these birds forage of places where natural food and plastics accumulate. With an average of 10 plastic pieces, these birds also carry more plastic items in their stomachs than other seabirds

Other species such as gulls regurgitate indigestible food items regularly. This may explain, why out of 5000 analysed individuals, less than a fifth (16%) has been found with plastic, even though some gulls are known for foraging at landfills and occasionally on chips stands.

Much less is known about marine mammals, and only a few species have been encountered with ingested plastics. In total, 5100 whales have been studied, 10% were found with plastic. Baleen whales tended to have more plastics than toothed whales. In seals, the number is even smaller, less than 1% of almost 10,000 individuals analysed, contained some plastic.

Putting things in the right perspective

There are spectacular cases in the media of beached whales, full of plastic, but it is often the less conspicuous species that are most affected, as shown in this current review study. The species with the highest average number of plastics is one of the smallest seabird species. The Tristram’s storm petrel, a seabird of the same size as a blackbird, was found with on average 203 plastic items in its stomach, a single bird was even found with 615 plastic pieces.

There is no doubt, every individual with plastic in its stomach is one too much. All of us are responsible, the huge amount of plastic debris in the oceans is purely caused by humans and it is our responsibility to make sure that no more plastic enters the ocean and consequently marine animals.

Large birds eat large plastics. Plastics collected from the stomach of a Laysan Albatross on Hawaii