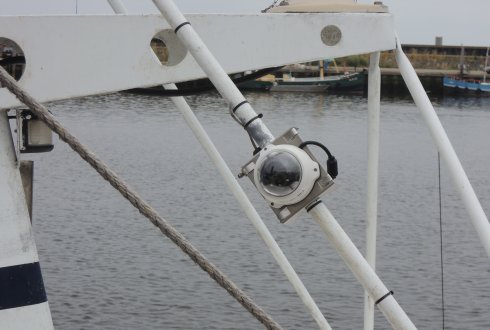 This study assessed the bycatch of harbour porpoise (Phocoena phocoena) in the Dutch commercial bottom-set gillnet fishery, which is one of the priorities defined in the conservation plan for the Harbour porpoise in The Netherlands. The results show that bycatches occur in both single-walled gillnets as well as trammel nets with an estimated annual number of 23 (95% C.I. 2-44) porpoises bycaught during the study period (1 June 2013 to 31 March 2017). Applying this value to the average number of harbour porpoises occurring in Dutch waters (about 40.000), the approximate annual mortality lies between 0.05% and 0.07%.

Target on harbour porpoise bycatch: reduce to below 1%

The harbour porpoise is protected under various national and international treaties and agreements, including the Habitats Directive, OSPAR, ASCOBANS and the conservation plan for the Harbour porpoise in The Netherlands. ASCOBANS recommends reducing bycatch to below 1%, based on the most reliable population estimate. This research was commissioned to assess the impact of the Dutch bottom-set gillnet fishing sector on porpoises occurring in Dutch waters. The results show that during the study period mortality caused by this fishery lies between 0.05 and 0.07% per year. While this is substantially less than the objective of 1%, it is important to bear in mind that this value does not include bycatch from other gillnet fleets, such as non-Dutch commercial or Dutch recreational fishery. Also, as the “Dutch” porpoises are part of a larger North Sea population, they might face bycatch in other areas of their range. To determine impacts on the North Sea population level similar studies need to be conducted by all range countries.

The most important recommendation is to carry out research into the extent of bycatch on the Dutch continental shelf by other fisheries sectors, such as foreign commercial and Dutch recreational bottom-set gillnet fishing. The researchers also call for the development of a cost-effective mobile Remote Electronic Monitoring system that could also be applied in the larger context of the Data Collection Framework. For the future it is also important to legalise the landing of harbour porpoise bycatch for research (such as pathology). One key challenge of bycatch studies in general is the current poor quality of available fishing effort data, in particular for gillnets. Effort data should include reliable and complete information on the number of nets set, the soak time and length of nets, as well as their height and mesh size. It should be collected by all fleets operating in the North Sea, to allow reliable mortality estimates for the North Sea porpoise population. Finally, as bycatch levels will change in relation to fishing effort and changes in fishing gear, as well as changes in distribution and numbers of harbour porpoises, they should be assessed on a regular bases.

Successful collaboration after a difficult start

This project was commissioned by the Dutch Ministry of Agriculture, Nature and Food Quality and conducted in partnership between Wageningen Marine Research (former IMARES) and Marine Science & Communication (MS&C), working closely with the voluntarily participating fishermen. In spite of a difficult start of the project - due to concerns by the participating fishermen regarding their privacy data security, as well as  technical problems - a successful cooperation between all project partners - the government, fishers and researchers –was achieved.