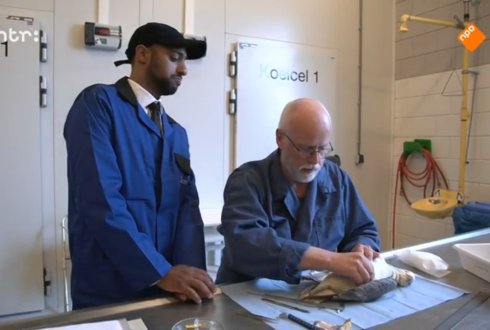 De Buitendienst recently visited Wageningen Marine Research in Den Helder. Together with researcher Jan Andries van Franeker they looked at the plastic pieces coming out of the stomach of a Northern fulmar. A total of 85 pieces of plastic were found in one stomach.

Watch the fragment (only in Dutch):

The stomach of the dissected bird contained no less than 85 particles. But all of them were very small, not doing well on camera. In the documentary only a plastic garment needle pin was properly filmed. Unfortunately, the photo of all cleaned plastic contents was not shown on TV. Although the number of 85 bits of plastic was well above the current Dutch average of 24 particles, the plastic mass of 0.23g was slightly below the current Dutch average of 0.26g.