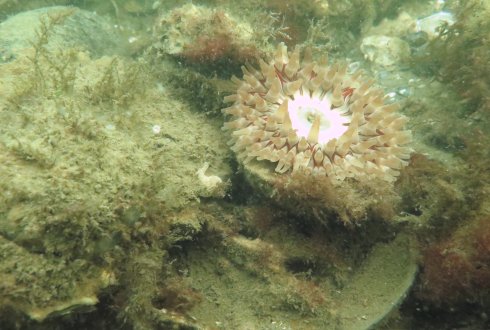 The flat oyster, inextricably linked to the Dutch North Sea for hundreds of years, nearly disappeared last century. Only one island population in Lake Grevelingen survived. However, these shellfish could not be studied in their natural environment until a research diver discovered a large oyster reef in the coastal zone near Zeeland (the so-called 'Voordelta') in 2016. A truly unique discovery and a great opportunity to research the mysteries of the flat oyster.

The results, published last week in Marine Biology Research, reveal that the competitive Japanese oyster is facilitating the return of its Dutch cousin and helping to restore flat oyster reefs.

Japanese oysters to the rescue

Flat oysters in the Voordelta area benefit from the presence of Japanese oyster shells. Flat oysters predominantly use shell fragments from Japanese oysters as settlement substrate. The number of species within the oyster reef was 60% higher compared to the direct environment. This is the joint conclusion drawn by researchers at Bureau Waardenburg, Wageningen Marine Research, SAS Consultancy and ARK Natuurontwikkeling/WWF in a scientific article published in Marine Biology Research.

Flat oyster reefs used to be widely distributed over the North Sea. "Until the early twentieth century, oyster reefs covered approximately 20% of the Dutch North Sea," says Wouter Lengkeek, a marine ecologist and diver at Bureau Waardenburg. "But overfishing, diseases and cold winters nearly caused the flat oysters to become extinct early last century. Only Lake Grevelingen contains a small source population." The species has since been added to the EU Red List of Habitats and the OSPAR List of Threatened and Declining Species and Habitats. That makes the 2016 discovery of a flat oyster reef near the Dutch coast even more remarkable. It opened up opportunities for further research on the native oyster in its natural environment.

"The substrate preferences of our native oysters and their effect on other marine animals in the North Sea was a mystery because these elements were difficult to observe and study," says Marjolein Christianen, who was previously with Bureau Waardenburg and now works at Wageningen University & Research. "These results demonstrate that the conditions for the recovery of flat oyster reefs are present at the local scale in the North Sea. We’ve also seen that the return of native oysters can be facilitated by the presence of shell fragments from Japanese oysters."

These days, the Japanese oyster reefs offer vast surfaces made of hard material. They are not as popular with fishermen or water sport enthusiasts, but they are much-loved by native oysters. "This creates a relatively undisturbed area in which the flat oysters can grow and breed."

A great deal of attention is being devoted to the recovery of native oyster reefs in the Netherlands and around the world. In historic documents (Figure 2.1.1a from Smaal et al., 2015), natural oyster reefs are described as rich ecosystems where other marine animals flourish, making them popular fishing spots. Detailed information about the characteristics of native oyster species is lacking because most flat oysters disappeared last century as a result of overfishing and an aggressive parasite. "The discovery of this oyster reef serves as a catalyst for the recovery of flat oyster reefs in the Netherlands," says Karel van den Wijngaard of ARK/WWF. "Understanding the flat oyster in its natural environment will help us adapt recovery plans to the needs of the species, thereby greatly increasing the odds of a successful recovery."