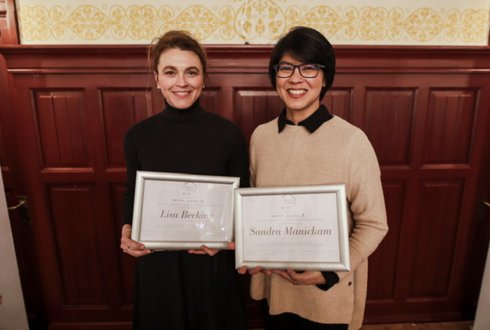 Tropical marine biologist Lisa Becking from Wageningen University & Research has won the L'Oréal Unesco For Women in Science fellowship. This prize is intended to stimulate the scientific career of successful young female researchers.

Lisa Becking studies how marine organisms adapt to changes in their environment and uses this knowledge for nature protection. During a festive gathering, the biologist received a grant of 25 thousand euros to spend a semester at the renowned Netherlands Institute for Advanced Study (NIAS) in Amsterdam. Here Becking can work on deepening scientific knowledge and writing scientific publications.

Becking won the fellowship for her research in The Bird’s Head Seascape in Indonesia, an area with the largest marine biodiversity in the world. The coral reefs are promoted as a top destination for tourists. At the same time, they are under pressure from both global processes such as climate change and from local problems that weaken the reef, such as overfishing, pollution and erosion.

"After years in the field," says Becking, "I have come to a better understanding that the conservation of coral reef ecosystems depends on both ecological and evolutionary processes under water, as well as socio-economic processes above the surface of the water. And that these different processes are intertwined."

In January Becking leads an expedition by boat with a multidisciplinary team of scientists, conservationists and teachers from Indonesia and the Netherlands. At this floating university, Becking hopes to find a way to redesign marine nature parks in order to strengthen the resilience of both ecosystems and the local economy against climate change.

For Women in Science

The scholarship is an initiative of L’Oréal and the Dutch UNESCO Commission, together with the Netherlands Institute for Advanced Study (NIAS), the National Network of Female Professors (LNVH) and the Royal Holland Society of Sciences (KHMW).

The international program For Women in Science has the motto ‘The world needs science, science needs women’. The program has been around since 1998 and awards prizes to exceptional female researchers working in the exact sciences. Ultimately it should lead to an increase in the number of women in (top) scientific positions.