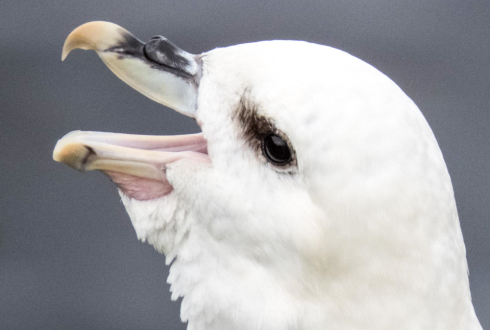 A new report has been published on the monitoring of plastics in stomachs of Northern Fulmars beached in the Netherlands. This indicator is used in Dutch and European policy decisions.

The observed trend shows that the quantity of plastics in stomachs of fulmars from the Dutch coast is somewhat decreasing. The decrease is statistically significant, but the rate of change is slow. In order to reach international policy targets for ecological quality, continuous additional policy measures and increases in public awareness are required. The long-term policy target is that the proportion of fulmars with more than 0.1g of plastic in the stomach should be reduced to under 10%. Among the 115 fulmars studied in the 5-year period 2014-2018, 43% exceeds the 0.1g limit for ingested plastic mass. Almost every stomach (93%) contains some plastic. The ‘average’ fulmar flying along the Dutch coast currently holds 24 particles of plastic in the stomach weighing 0.26 gram.

Thanks to the continuous efforts of many volunteers, over the recent 5-year period 2014-2018, a total of 115 fulmars with intact stomachs was available for the monitoring study in the Netherlands.

The stomach content of fulmar NET-2018-010 is a fairly representative example for the stomach contents of fulmars off the Dutch coast. With 38 plastic particles the number of particles is above average, but overall mass of plastic, which is our main monitoring metric, is 0.2367g so somewhat below the recent Dutch 2014-18 average of 0.26g of plastic.

Robustness of the monitoring data becomes evident when looking at trends in different age-classes over the full dataset of beached fulmars from the Netherlands 1979-2018. Younger fulmars (blue circles) usually have more plastics in the stomachs than adult birds (red triangles). Since these age-groups show similar trends, the monitoring system can use the combined data from fulmars of all ages (grey diamonds, including birds of unknown age).  The graphs shows the decrease in the percentage of fulmars having more than 0.1g of plastic in the stomach.

Using annual data on the proportion of fulmars having more than 0.1g of plastic in the stomach from 2002 to 2018 (red circles in the graph), a model can be constructed to predict future developments (blue circles). At current rate of change, the model predicts that in the Netherlands the target of 10% of fulmars with less than 0.1g of plastic in the stomach may be reached by the year 2049. This requires continued new policy measures and further increase in public awareness. The model requires continuation of the rate of change, which does not allow that we lean back assuming it will all be right by itself!