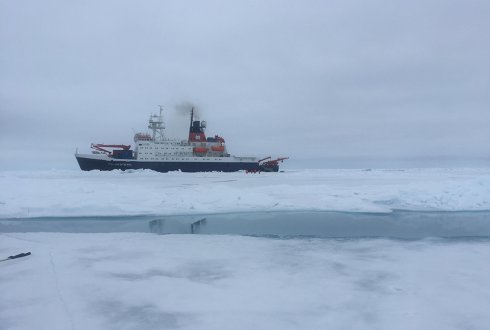 In September 2019 the MOSAiC expedition will start, which stands for Multidisciplinary drifting Observatory for the Study of Arctic Climate. The German icebreaker Polarstern will be attached to an ice floe in the centre of the Arctic Ocean and stay there for a year, drifting along with the sea ice. The ice floes around the ship will serve as an open air laboratory, where meteorologists, biologists, oceanographers, physicists and chemists from 17 different countries will study the Arctic Ocean, the sea ice and the atmosphere for an entire year. With this research, people will gain knowledge on the consequences of climate change, for example due to the loss of sea ice. It will also contribute to improve weather and climate predictions.

The Polarstern will serve as drifting laboratory, but also hotel, and will be resupplied by Russian, Swedish and Chinese icebreakers throughout the year, which will also make sure that crew members and researchers are alternated every two months. Additional measurements will be done using research aircrafts and drones. This vast logistic endeavour will result in unique information, necessary for understanding the ecosystem and the consequences of climate change. The knowledge on the Arctic Ocean and atmosphere is limited, particularly in other seasons than summer. Conducting year-round research means that some crew members and researchers will be working in the dark and under extreme cold conditions. Because most researchers will be on board for only two months, but are interested in collecting year-round data, and because of the logistical challenges, collaboration is key during MOSAiC.

A financial contribution of the Dutch Scientific Organisation (NWO) enables Dutch scientists to join the MOSAiC expedition. With three projects, the scientists can contribute to increasing the knowledge of the Arctic Ocean. Two of these project will be conducted by researchers of Wageningen University and Research. The project of marine biologist Fokje Schaafsma focusses on the biology of polar cod, which is regarded as a key species in the Arctic food web. Atmospheric researcher Laurens Ganzeveld aims to investigate the exchange of so-called climate-active gasses between ocean, sea ice and atmosphere, to gain knowledge on the long-term consequences of climate change on the global climate. Both projects can be related to the third project on sulphur and carbon cycles, which will be carried out by the University of Groningen.

Young individuals of polar cod (Boreogadus saida) have been found residing close to the sea ice, during research conducted in close collaboration with colleagues from the Alfred Wegener Institute in Germany. These studies showed that small animals that are closely associated with the sea ice are an important food source for the young polar cod. In addition, the fish seems to drift along with the sea ice to move from their shallow spawning areas close to land to the central Arctic Ocean. In the new project, researchers aim to increase the knowledge on how the sea ice is used, about the distribution of the fish and about differences between seasons. During this project there will also be a close collaboration with researchers from several countries.

Insights in the exchange of climate-active gasses between ocean, sea ice and atmosphere

Considering both the observed and the expected decrease in sea-ice cover of the Arctic Ocean, the exchange of carbon dioxide, methane, ozone and dimethylsulphide between the ocean and atmosphere will change. The first two gasses are generally known as greenhouse gasses, but the chemical compounds ozone and dimethylsulphide can also have an influence on the climate. That is why the term climate-active gasses is used. The exchange of these chemicals between the ocean, the sea ice and the atmosphere depends on many parameters such as plankton activity, that produces dimethylsulphide but absorbs carbon dioxide, but also of meteorological and chemical processes. The exchange of gasses will be measured as much as possible, but will also be calculated using models. The latter will mainly done within the NWO-financed project in Wageningen, while the measurements will be performed by projects financed by the US Science Foundation; a nice example of collaboration with international partners involved in MOSAiC.

In recent decades, the decrease in annual sea ice has become apparent. The amount of sea ice that melts away during summer is increasing, causing an increase in the open water surface area. Additionally, the area of the Arctic Ocean that is covered by sea ice year-round is becoming smaller. Predicted is that the Arctic region will be completely ice free during the summer months in a few decades. This has major consequences for the climate of the north pole area and the rest of the planet. Sea ice has a major influence on heat and gas exchange between the atmosphere and the ocean water. But life in the Arctic Ocean, adapted to extreme circumstances and large environmental differences between seasons, will also be influenced by this. Because there is relatively little knowledge on climate processes and life in the Arctic, particularly in the non-summer seasons, it is important to collect more information.

A comparable drift experiment was conducted for the last time 125 years ago with the sailing vessel Fram, led by the Norwegian Fridjof Nansen. Nansen’s goal was to reach the north pole by letting the ship get stuck in the ice and having it drifting along with it. Fram’s special construction ensured that the ice wouldn’t crush the ship. The ship drifted from the new Siberian Islands on to the Central Arctic Ocean but did not reach the geographical north pole. Eventually Fram ended up in the north of the Atlantic Ocean. During the drift scientific research was conducted, and a lot of new biological, meteorological and oceanographic data was collected, for example, on the ocean’s depth and on different water layers that have a different temperature and salinity.

Do you have a question about Arctic sea ice? Ask our expert: dr. FL (Fokje) Schaafsma
Contact form + Show more (1)