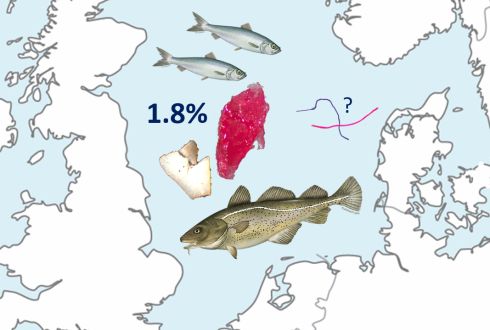 Researchers of Wageningen Marine Research studied the abundance of plastic in North Sea fish. In the North Sea, plastic pollution is common. Beside plastic on beaches, in seawater and in sediment, plastics are regularly encountered in stomachs of marine organisms.

One famous example is the northern fulmar. Long-term research shows, that 93% of the fulmars from Dutch beaches contain some plastics, on average 24 pieces. Do these fulmars consume plastics directly from the sea surface or do they forage on prey that contains plastic?  This question has been studied by a group of Wageningen Marine Research researchers. They also proposed fish species that may be suitable for long-term monitoring studies of plastic in the North Sea.

Over a period of ten years, fish were collected from different areas of the North Sea. These data were combined with datasets that have been published previously by Wageningen Marine Research researchers. The entire dataset includes 4389 fishes from 15 species. Thanks to the large sample size, detailed analyses of abundance and distribution of plastic in fish could be determined.

Low numbers of plastics in fish

With the support of several students, fish stomachs were analysed under the microscope. Much patience was necessary, as from the 4389 fishes, only 1.8% of the individuals had any plastic in their stomachs.

One exception was Atlantic cod. Out of 114 cods, 12.3% were found with ingested plastics. Cod is a demersal fish species and demersal species seem to have more plastics in their stomachs than pelagic fish.

Over the 10-year period the number of fish with plastics in their stomachs decreased slightly. A more pronounced decrease of plastic has been detected in fulmars. Whether these reductions follow a similar trend remains unclear and more research is necessary to support this data. All plastic pieces detected in fish stomachs were tiny, three millimeters on average.

Beside plastic particles, researchers also encountered polymer fibres, mainly originating from clothing. These light-weighed fibres are easily airborne and are found in seawater where they become available for fish. However, airborne fibres also occur in lab areas and contaminate stomach content samples during the analysis.

To avoid the over-estimation of plastics in fish, the contamination rate was tested in a separate sample dish, filled with clean water. Results show that the time of exposure determines the number of fibres found in a sample. As most fibres in fish samples seemed to be airborne contamination, these fibres were excluded from further analysis.

The low number of plastics found in fish stomachs led to the conclusion that plastics in fish do not substantially contribute to plastics found in fulmars. The plastic particles were so small that fulmars probably excrete them quickly. Out of all species studied, cod and sprat seem to be suitable for long-term monitoring. Both these fish species are very common over a wide region and forage in parts of the watercolumn that fulmars can’t reach.  As such these fishes may represent valuable  additional monitoring species.