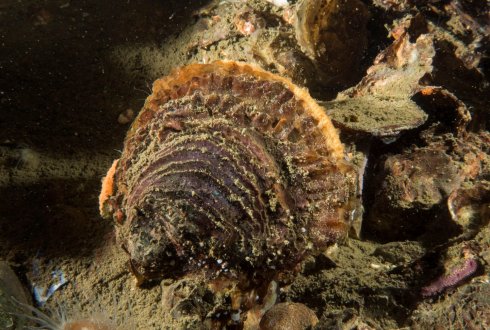 Oyster reefs and mussel beds are essential for a healthy, rich underwater life. Restoration of hard substrates on the seabed is therefore a focus in the Dutch policy (Natuurambitie Grote Wateren, Uitvoeringsagenda Natuurlijk Kapitaal). Wageningen Marine Research collaborates with other parties to recover European flat oysters reefs in the Netherlands. In recent years, a number of studies have been completed on the conditions under which reintroduction of the flat oyster in the North Sea can be carried out successfully. A number of reintroduction projects are already taking place.

Oyster reefs and mussel beds filter the seawater and form a resting and spawning area for fish such as plaice, cod and sea bass. In their turn, they attract sharks, rays, porpoises and seals. These shellfish beds provide a hard substrate where e.g. dead men’s thumb, a soft coral, can settle. Sharks, rays, smaller fish and also the common cuttlefish can attach or deposit their eggs. In addition, all kinds of birds forage on the many small fish and shrimp that live on and around shellfish bed. Over a century ago, one-fifth of the Dutch part of the North Sea was covered with European flat oyster beds, but those have completely disappeared because of fisheries, diseases and pollution.

Is restoration of oyster reefs feasible?

First of all, we identified the conditions for reintroduction of the flat oyster in the North Sea. Also, a plan for a pilot study was made in collaboration with a number of parties (Bureau Waardenburg and Sas Consultancy). Next, a desk study was conducted for the ministries of Economic Affairs and Infrastructure and the Environment.

For the Wadden Sea, a similar feasibility study has been conducted within the Wadden Sea Program. A follow-up study for Economic Affairs with the same consortium, supplemented with Deltares, went deeper into the possibilities that wind farms can offer in restoration of European flat oyster populations in the North Sea.

In March 2016, ARK and WWF, in collaboration with Wageningen Marine Research, Bureau Waardenburg and Sas Consultancy, launched a trial to restore mussel beds and oyster reefs in the Voordelta. This restoration project is part of the Haringvliet Dream Fund Project. Two trials were conducted near the coast in the province of South Holland. The knowledge gained with these and subsequent tests contributes to the return of shellfish beds.

The oysters beat us to it

During preliminary research into suitable trial sites, Bureau Waardenburg divers found a surprising finding: A natural flat oysters reef (mixed with Pacific oysters) had already developed at Brouwersdam. One of the research questions was then how the reef could have been established and whether it could sustain itself.

We found high concentrations of European flat oyster larvae at the sluice in the Brouwersdam, between the Grevelingenmeer and the Voordelta, originating from the flat oyster population in the Grevelingenmeer. At the Hinderplaat, off the coast of Voorne Putten - one of the pilot sites of the project, no larvae were found. This location is too far from the Grevelingenmeer to benefit from the larval flow from the sluice. Model studies by Deltares confirm this. Finally, water samples were taken at the oyster reef near the Brouwersdam. Here too large concentrations of oyster larvae were found. The size of the larvae indicated that local production here is possible. In order to investigate the settlement of oyster larvae, artificial settlement material is provided in the form of empty oyster shells.

Research in the coming years

Currently there are several exciting initiatives, both in the Netherlands and in Belgium and Germany, to restore European flat oyster reefs. Possible restoration sites need to be protected from bottom trawling fisheries. At the moment, we are considering experimenting near shipwrecks and oil/ gas platforms, and offshore wind farms. Future closed areas may also be suitable pilot locations.