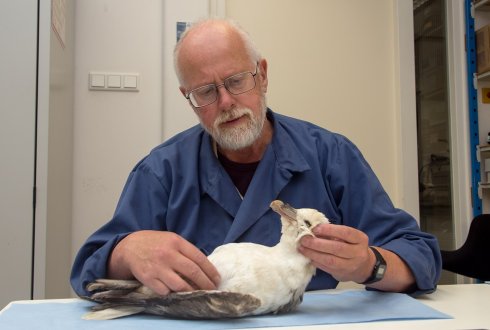 On the website of Resource, biologist Jan van Franeker responds to a recent American study which suggests that seabirds eat plastic because a scent produced by algae growing on the plastic would cause confusion with food. “A nice theory,” says van Franeker, “but weakly substantiated”. Resource asked why.

Do seabirds have a good sense of smell?

“The capacity of seabirds to use smell varies greatly. In particular the petrels are among the group of birds that have a good sense of smell. They use this capacity to find food, but also for various other things, such as to orientate themselves in bad weather to find their colony or their spot in the colony. There is no doubt about whether smell plays a role in their life.”

Could smell therefore play a role in the ingestion of plastic?

“The thought itself is not farfetched. Birds follow scents, such as those of ships jettisoning their trash from the galley. Scents do play a role in the foraging behaviour of some seabirds. The problem with this study is that the authors do not provide compelling evidence of a link between plastic in the ocean and scent.”

What about the scent emitted by the algae that attach to plastic?

“The scent of DMS (dimethyl sulphide) is usually released by phytoplankton (freely drifting algae) when eaten by zooplankton. Some algae can grow on plastic and produce a biofilm. When zooplankton grazes on this biofilm, a DMS signal could be released and attract seabirds that eat zooplankton.”

So, it is theoretically possible?

“Scents on the open sea play a role in the search for large areas of food. But it is unlikely that the DMS emitted by plastic plays a significant role. Spots with a lot of plastic would have to emit a scent with a density similar to that of an algal bloom that is grazed by zooplankton. That really is an unrealistic assumption. The researchers only demonstrated the signal in the lab.”

Is it nonsense, then?

“In my opinion, DMS plays no, or at most a very indirect role in plastic ingestion. However, what I strongly oppose is the policy recommendation made by the authors of the paper. They suggest to prevent the growth of algae on plastic debris by adding anti-fouling agents. Such agents are bad news. We would add toxic substances to all plastics in the hope that it would prevent algal growth on those plastics that might end up in the sea.  Such a cure is many times worse than the hypothetical disease.”