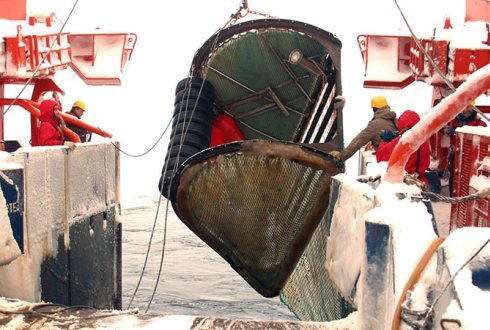 The PhD project Iceflux-NL aims at estimating the level at which polar ecosystems and their living resources are affected by changing sea ice habitats through investigations of the distribution, population structure and diet of trophic key species in the under ice habitat.

Microbial communities within sea ice are presumed to be a major carbon source for the pelagic ecosystem covered by ice. Also, the ice-water interface constitutes an important habitat for many organisms, including e.g. Antarctic krill as a key species. Highest densities of top predators are strongly associated with sea ice where primary production measurements suggest low productivity of the water column underneath. Climate warming can cause changes in extent, thickness and seasonal persistence of sea ice and can therefore have consequences for ecosystem functioning. Understanding sea ice food webs can help the development of policy for conservation and fishery, considering future changes.

On two Antarctic and one Arctic expeditions, biological sampling at the under-ice and open water surface will be done with the worldwide unique Surface and Under Ice Trawl (SUIT), which was hindered in the past by the inaccessibility of the sea ice underside. Diet of sampled organisms and energy flow between trophic levels will be analysed.

Abundance, biomass and distribution of trophic key species, such as Antarctic krill, in the under-ice habitat will be quantified, the importance of sea-ice derived carbon sources will be estimated and difference and similarities between Arctic and Antarctic food webs will be identified. Also, the effect of sea ice on community structure will be investigated.

This PhD project is financed in the New Netherlands Polar Programme by ALW-NWO and the Ministry of Economic affairs, Agriculture and Innovation, (EL&I), Wettelijke onderzoeks taken (WOT-04-009-036).

Client(s):
The Netherlands Scientific Organisation and the Dutch Ministry of Economic Affairs