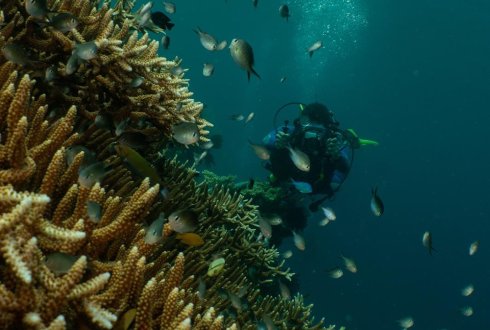 A remote paradise with the richest biodiversity in the world is threatened by tourists. Over the past two weeks, a team of scientists from Wageningen University & Research and (local) conservationists have been researching in Raja Ampat, Indonesia. Until now the area seemed untouched by coral diseases and climate change, but now the team has determined how the rapid changes above water have an impact below water.

On board the expedition ship were as many Indonesians as Dutchmen, men and women, social- and marine researchers. "With this scientific Noah's Ark, we were able to map the connections between the world above and below the water for each island," says expedition leader Lisa Becking. Among other things, it turned out that in areas where many tourists come, the reefs are affected by the sewage.

The team may have discovered a surprisingly simple solution to limit human impact in the area. It appears that the water flow on the spot reduces the influence of tourists. Unpurified sewage from a B&B can, for example, may be right above a reef. However, the reefs can remain healthy if the current quickly flushes out the pollution. While tourist boats discharging their black water near protected bays cause a bloom of algae and bacteria.

If the government were to chart sea depth and local currents and adjust future building permits to that, the impact on the environment could be minimized. In addition, one can think of simple solutions for sewage treatment.

This beautiful remote location runs the risk of collapsing under the pressure of people. Tourist boats and the rise of cheap B&B’s have caused a rapid influx of tourists to the area in the last five years. Plastic waste, erosion due to construction projects and sewage water end up directly above the reefs.

As a result, bacteria and algae enter the water that choke the corals. Apparently innocent preferences of tourists, such as a view of the sea and diving on untouched reefs, are disastrous for water quality.

The coral is now virtually unaffected in many places. It is clean, whole and moreover there are 600 species of hard coral. By way of comparison: in the Caribbean, there are only 100. Divers can look at one square meter for a long time to see what lives and swims: all kinds of fish, crabs and sponges. And then there are also large manta rays and sharks.

Logical that many tourists come to see it. "By the way, that's not just bad news," Becking explains, "Because they also raise money that can be used to protect the area." However, many diving companies and tour operators do not have the required permits. Many day tourists do not seem to have bought a permit as well. A lot can be gained through more supervision of existing rules.

During the expedition, the team members wrote several blogs: