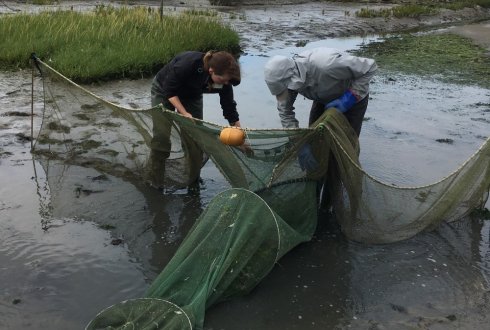 The Wadden Tools - Swimway Wadden Sea project can start thanks to a contribution from the Wadden Fund. This was announced by the Wadden Fund last Friday. The aim of the project is to find out with which management measures the declining fish stocks in the Wadden Sea can be restored. Wageningen Marine Research is one of the knowledge partners.

Ingrid Tulp, who is involved in the project as a scientific coordinator at Wageningen Marine Research, considers it a wonderful opportunity to take a plunge to better understand the underwater world of the Wadden Sea. "We have been measuring once a year how much fish there is in the Wadden Sea for almost 50 years, but that does not mean we can explain the major identified changes. This requires more in-depth research into the causal relationships. In addition, we know virtually nothing about how the larger species such as sea bass, hardener and sharks and the schooling fish, which are the staple food for birds and marine mammals, use the Wadden Sea.This project offers an excellent opportunity to use our expertise for this unique area, which may have world heritage status, but where much can still be learned about fish," says Tulp.

From flyway to swimway

By implementing pilots, it will be explored how the Wadden Sea function for fish species can be strengthened with governance measures. In addition, we will map which nature conservation and sustainability measures from the past have had a positive effect on the nursery and switching function of the Wadden Sea for fish. With that knowledge in hand, we can work purposefully towards a more sizable fish stock in the Wadden Sea.

Three knowledge institutes work closely together within the Wadden tools - Swimway Wadden Sea project: the University of Groningen, the NIOZ Royal Netherlands Institute for Sea Research and Wageningen Marine Research. The project group also consists of the Waddenvereniging and Sportvisserij Nederland. Various site management (nature) organisations are also involved in the implementation of the project, and cooperation is sought with professional fishermen in the Wadden Sea.

Swimway Wadden Sea is part of the umbrella Wadden tools programme that works on developing effective and efficient management measures for the nature of the Wadden Sea. The total duration of the Swimway Wadden Sea project is five years and it will end in 2024.