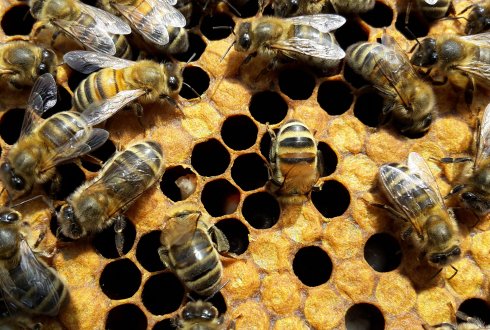 The honeybee is susceptible to all kinds of diseases. The Varroa mite is a major threat to the European honeybee. Brood diseases such as American foulbrood (AFB) and European foulbrood (EFB) affect honeybees in the larval and pupal stage. Nosema is a disease that is caused by a unicellular parasite.Viral diseases such as Deformed Wing Virus (DWV) and Chronic Bee Paralysis Virus (CBPV) are often latent in bee colonies. Ranging from pollen mites to wax moths, they all benefit from honeybees in one way or another.

The Small Hive Beetle (Aethina tumida) has recently been introduced in Southern Italy in the province of Calabria. This species, new to Europe, parasitizes bee colonies with damaging effects.

Brood diseases affect honeybees in the larval and pupal stage. Although these diseases do not usually lead to the mortality of a colony, they can constrain its development. Bees can escape from brood disease by swarming and by actively abandoning the brood. If a beekeeper represses or disturbs these mechanisms, brood diseases can threaten the existence of the colony.

Bee colonies are affected by brood diseases resulting from bacteria, fungi, viruses and mites. Brood diseases impact the health of individual larvae and pupae, often resulting in mortality. Serious infections can affect much of the brood, which can ultimately slow the growth of a bee colony. Brood diseases can be exacerbated by poor conditions for bees, such as bad weather and lack of food.

Important bacterial diseases are American foulbrood (AFB) and European foulbrood (EFB). These brood diseases are extremely contagious and difficult to eradicate. Their control requires radical intervention by the beekeeper. American foulbrood is a notifiable disease; a suspected outbreak must be reported to the competent authority. However, the government does not have the obligation to actually control the disease. This remains the task of the beekeepers.

Another important brood disease is chalkbrood. This fungal diseases changes infected larvae and pupae into mummies. It often occurs during long spells of wet and cold weather.

Most viral diseases are latent in bee colonies and are rarely a problem. However, viral infections can be exacerbated by stressful situations and can then have serious consequences for bees. Since the introduction of Varroa destructor in 1983, a number of viruses have started to play a more prominent role in the health of bee colonies.

At least 23 viruses are known to be associated with the genus Apis (De Miranda et al. 2012; Runckel et al. 2011; Bromenshenk et al. 2010). In general, viruses are latent in honeybee populations and cause little or no damage to bee colonies. However, virus replication may be stimulated or activated (usually in stress situations), resulting in the emergence of disease symptoms. This can cause incidental damage or even colony mortality.

An exception to this rule is the Deformed Wing Virus (DWV). Due to the introduction of Varroa destructor, this virus has become a serious threat (Martin et al. 2012) and is now a structural problem for the health of honeybees. It is primarily caused by the effective transmission of DWV by Varroa mite; the virus also replicates in Varroa mites. In addition, Varroa mites cause an immune response when they feed on bees. This immune response activates the replication of virus particles in bee tissue. DWV can cause physical symptoms such as deformed wings, which in turns affect bee lifespan.

During long, cold periods in the growing season, the Chronic Bee Paralysis Virus (CBPV) can become a problem. This virus causes paralysis. Bees infected with this virus can be identified by their black colour and their lack of hair.

Viruses are receiving increasing attention because the techniques to detect viruses have improved, providing more insight into the role they play in the health of bees. In relationship to bee mortality, Bees@wur is also conducting research into:

Which viruses are present in Europe?

Nosema is a disease that affects adult honeybees. It is caused by a unicellular parasite. The parasite lives on the tissue in the midgut. Nosema is prevalent world-wide. The disease also occurs frequently in the Netherlands and Belgium. Nosema apis can cause substantial damage. Since 2008 Nosema ceranae has also been present in the Netherlands. This species, probably an exotic, is present in virtually all bee colonies, but it is unknown how and whether it causes disease or mortality in bee colonies in the Netherlands.

Only in host cell

Nosema apis and Nosema ceranae are Microsporidia. Microsporidia are obligate intracellular parasites. This means that they cannot live and reproduce outside the host cell. Microsporidia live in cells of insects and other invertebrates. Quite recently, Microsporidia parasites were also discovered in humans (Barbancon 2007).

Mostly in cold and rainy periods

Nosema apis usually strikes in the spring. Long-lasting cold and rainy periods can result in insufficient pollen being produced; as a result bees become susceptible to this intestinal parasite. This can lead to mortality and dysentery. The symptoms of Nosema infestation are also characterised by the presence of dead and cramped bees inside and in front of the hive.

Surviving outside of the cell

The lifecycle of Microsporidia includes the spore stage, during which the parasite can survive for long periods outside a cell. The spread from cell to cell and from one organism to another takes place in the spore stage.

The lifecycle of Tropilaelaps spp. in Apis mellifera colonies is comparable with the lifecycle of Varroa destructor. Under normal conditions, 1-4 adult mites enter the brood, each of which produces 1 to 2 offspring. The mites have a preference for drone brood over worker brood (ratio: 3:1). Equal numbers of males and females are produced. When a young bee emerges, the adult female mites also leave the brood cell. The immature offspring and males remain behind and die. The mites remain on the adult bees for no more than two days before they again enter the brood cell to reproduce.

Acarapis mites (Acarapis woodi) are parasites that attach themselves to the first pair of trachea (breathing tubes) of the adult honeybee. The queen, workers and drones can all become infected.

The mite is miniscule: 85-116 μm long and 57-85 μm wide, is yellow-white in colour and has eight legs. The mouthparts, with a piercing/sucking mechanism, are powerfully developed. The mite probably produces a substance that weakens chitin, to make piercing easier. The first pair of legs contains the organs of touch.

The amoeba Malpighamoeba mellificae Prell belongs to the group of unicellular animal-like organisms, the Protozoa. These protozoa move by means of pseudopodia (false feet) and feed by phagocytosis.

Malpighamoeba mellificae can form cysts. These cysts have a highly resistant cell wall; they are spherical with a cross-section measuring about 7.5 μm. When the cysts, which are consumed by the bees with their food, reach the rectum of the bee, the amoebae are released. They crawl back through the small intestine into the Malpighian tubules, where they multiply and eventually form cysts once again. These cysts are then excreted with the faeces.

The amoebae damage and clog the Malpighian tubules. As a result, metabolic waste products build up and become toxic to the bee. They also disrupt the bee's water balance, causing dysentery.

Experienced beekeepers have a basic rule of thumb: be careful when storing honeycombs and hive material. And there is a reason for this! Wax moths can completely devour stored honeycombs. They can even destroy the wooden frame! By themselves, wax moths are not a threat for honeybees, but in weak colonies they can eat their way through the honeycombs.

The common name for Braula coeca is the bee louse. In reality, it is a wingless fly that is entirely dependent on honey bees for its survival. The bee louse no longer occurs in the Netherlands. This species probably disappeared due to the introduction of the Varroa mite. The products that are used to control the Varroa mite are harmful for this commensal organism.

To prevent the introduction of exotic parasites and diseases, European directives have led to national legislation in the Member States. This legislation focuses especially on two exotic parasites: Small Hive Beetle (Aethina tumida) and Tropilaelaps spp. The Dutch government has named Bijen@wur as the national laboratory that is responsible for the legal monitoring of the import of bee queens.