In many cases, winter mortality of honeybees can be attributed to Varroa mite in combination with secondary viral infections that are transmitted by the mite. Bijen@wur studies the consequences of this parasite for honeybees. An important component of this research is the development of optimised practical methods for beekeepers to control this mite.

For more detailed information about Varroa destructor and controlling Varroa mite, please refer to the Brochure on effective control of Varroa mite (in Dutch).

Photo album: for recognition and diagnosis

(Click on the picture to go to the photo album) 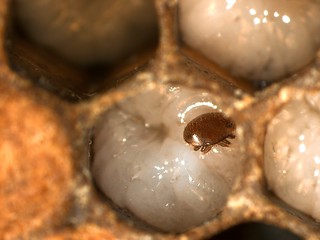 Varroa research as part of the National Honeybee Programme

The National Honeybee Programme has been established to provide tools for sustainable control of Varroa mite and to promote their use by Dutch beekeepers.

This programme includes the following components:

Applied and fundamental research on Varroa

Bijen@wur performs both applied research and a combination of applied and fundamental research into Varroa mite. The applied research focuses on aspects such as the integration of swarm prevention methods and Varroa mite control. For example, see the articles on:

The more fundamental research concerns the effects of Varroa mite on the vitality of honeybees and bee colonies. For example, see the scientific article on:

Research is also conducted into the degree with which the Varroa mite interacts with other bee mortality-related factors such as nutrition or pathogens. For example, we are currently working on:

In addition, we conduct research into the underlying resistance mechanisms of Varroa mite resistant breeding lines of Bijen@wur, in which the initial breeding stock consists partly of descendants of Gotland bees. 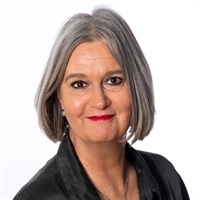 Do you have a question about Varroa destructor? Ask our experts: dr.ir. C (Carolien) Zijlstra
Contact form + Show more (1)

The legally registered resources to prevent the ectoparasite Varroa destructor in honeybee colonies can be found in the Database Veterinary Medicine of the Medicine Evaluation Board (MEB). Choose the target animal 'bees' from the list.

Other agents that are tolerated are the organic acids oxalic acid and formic acid.