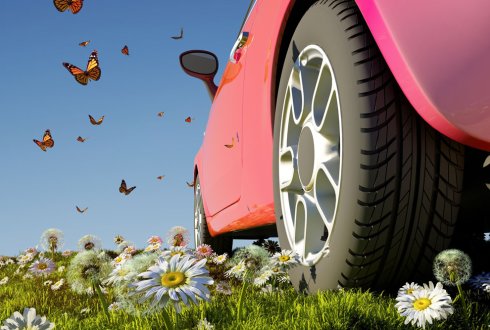 While the world has a problem with the imminent shortage of natural rubber, there is hope on the horizon in the form of European natural rubber. This can be attributed to the Russian dandelion, a small rubber-producing plant that only grows in the wild on the high plains of Kazakhstan. Six questions for Ingrid van der Meer, project leader at Wageningen University & Research and coordinator of the major EU project DRIVE4EU.

“Natural rubber is indispensable in tens of thousands of applications, from car and aircraft tyres to building materials and medical equipment. We are now fully dependent on Southeast Asia, where the largest rubber plantations can be found. In South America, where the tree originates and the rubber plantations used to be located, a fungal disease has made cultivation impossible. We must have an alternative available should this same disease rear its head in Asia. Moreover, production is already under pressure as lots of farmers are switching to the cultivation of palm oil, which is less labour-intensive and more profitable. The EU is looking to reduce its dependency on Southeast Asia and come up with a European alternative. As the global demand for natural rubber will only increase, an alternative is of the essence.”

Can a small plant really be the saviour of the global rubber production?

“We believe so. In a previous project called EU-PEARLS we showed that the Russian dandelion makes good-quality natural rubber and may be suitable for the large-scale production of natural rubber. In the follow-up project DRIVE4EU we have been working with European companies and research institutes to learn whether we could develop a successful European production chain. We just concluded the project and have made substantial progress across all stages of the production process. We now have a number of crop lines with a high rubber content for which we’ve developed proper cultivation protocols. We also have a patented extraction process that has been scaled up by engineering companies. We’ve made various impressive end products such as car and bicycle tyres too. Our calculations show that the economically viable production of European natural rubber is realistic within five to ten years. That means over 900 kilos of rubber per hectare.”

How is the market responding?

“European farmers are keen on strong and profitable rotational crops, and the Russian dandelion could be one. Investments in new, expensive harvesting equipment won’t be necessary as it resembles familiar crops such as chicory. In DRIVE4EU we also worked with other enthusiastic links in the chain like machinery manufacturers and tyre producers. As the economic tipping point is imminent, I expect all parties in the chain to soon be joining forces. On 19 October we are officially concluding DRIVE4EU with a stakeholder meeting to which we are also inviting companies that were not part of the consortium. We hope it will generate new connections.”

What challenges do the scientists still face?

“Improving the crop via breeding is still required, but that’s an ongoing process, as it is for wheat, maize and other crops. This is mainly in the hands of biotech company KeyGene. Production can be increased by continuing to select and breed using plants with thicker roots and even more rubber. There’s also lots to discover at the molecular level. We know relatively little about the plant genome and have yet to gain proper insight into all its qualities. It is important to note that the Russian dandelion cannot produce seed without being fertilised, something that the normal dandelion is able to do. This means there is no risk of other crops being overgrown, which will be a comfort to farmers.”

How about the quality of products from European natural rubber?

It is good. In the project, we made car tyres that were tested in extreme conditions in New Zealand. This showed that the tyres had better grip on slippery surfaces than conventional tyres and were able to reach higher speeds. Tests with bicycle tyres also showed positive results such as a better grip on wet roads.” When will we see Max Verstappen riding laps on ultrasofts with European natural rubber? I think in five to seven years. I expect tyre manufacturers to be using European rubber by 2025.”

Want to join the workshop?