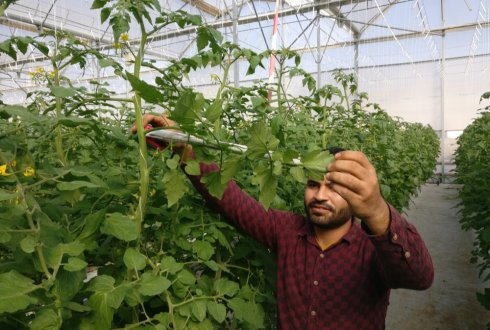 In Jordan vegetables are grown in in plastic tunnel greenhouses. A cheap solution. But the production per square meter is low, certainly when water consumption is taken into consideration. And Jordan has a shortage of water. The Greenhouse Horticulture Business Unit at Wageningen University & Research successfully assisted Jordanian vegetable growers with the transition to a more modern form of cultivation.

Two growers participated in the project: one in the Jordan Valley and one in the highlands near the capital Amman. A greenhouse of approximately 7,000 square meters was installed at the farms of both growers. The greenhouses contain modern equipment for, among other things, watering. The design of the greenhouses focused on the weather conditions and the financial capacity of the growers: they each had to contribute 50% of the costs.

Better results in the first year

The positive results were not only the effect of modern techniques. The growers and their employees received good training. In addition, the growers were asked to register irrigation. This not only led to more insight into consumption, but also made the growers more aware of the business operations and became familiar with the crop registration system.

The Jordanian project ended at the end of 2019. It is not yet known whether a follow-up will take place. If the project is extended, attention will in any case be paid to the dissemination of knowledge among other growers, for example through demonstration companies.

Our greenhouse horticulture experts engage internationally in local research, adaptive greenhouse design, and capacity building. We work worldwide: in Europe, the Middle East as well as in developing regions such as in Africa and Asia.