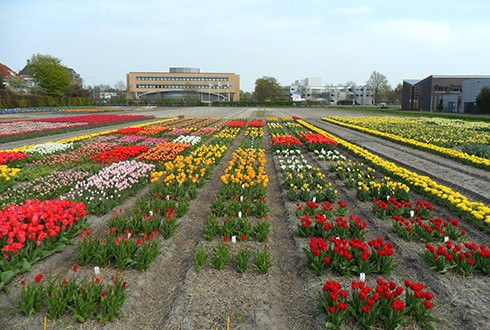 Tulip bulbs are susceptible to stem nematodes. Growers live in fear of the small pathogens as just one affected bulb can be disastrous for an entire batch. Moreover, until, very recently the standard hot water treatment remedy for daffodils, crocuses and other bulb plants did not work for tulip bulbs. Wageningen UR scientist Martin van Dam discovered that an improved process using hot water can ultimately have the desired effect.

Science had not yet managed to find a successful formula for a hot water treatment to eliminate nematodes in tulip bulbs, too. Van Dam studied previous research, started experimenting and eventually succeeded. “I discovered that tulips first have to be preheated to 36 degrees for one week. Then they have to be pre-soaked for four hours and kept wet for twenty. Finally, the bulbs need to be ‘boiled’ at 48 degrees. Bulbs remain intact under these conditions but the nematodes die.

The Netherlands Food and Consumer Product Safety Authority (Nederlandse Voedsel- en Warenautoriteit, NVWA) has provisionally approved tulip boiling as a method for suppressing stem nematodes in tulips. There are, however, strict conditions, Van Dam says. “Growers may only plant boiled bulbs on their own plots or sell them as pot tulips under strict conditions.”

“Growers must also realise that the treatment is labour intensive,” Van Dam continues. “The best time to do this is within three weeks after the bulbs are harvested, which coincides exactly with the busiest period of the year. Moreover, the treatment must be implemented fully – there is no room for HWT a bit less’, for instance, as that would increase the chance of the infection returning or that the NVWA would no longer permit boiling.”

Tested in practice for the first time last year, the new hot water method has given growers an effective alternative to destroying entire batches of tulip bulbs. Whether boiling is the best option is up to the growers themselves to decide. “If the tulips in question are of a common variety, it can be more efficient to destroy them. However, if the affected batch is of an expensive tulip variety that is rarely cultivated, the grower might prefer to boil the affected tulips and put them back in the ground.”

The research into the hot water treatment of tulips is financed by the Product Board for Horticulture.