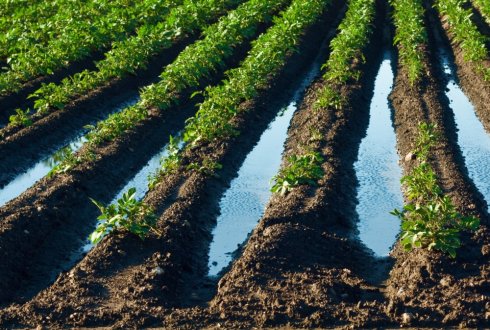 Extreme drought or abundant rain. This is the new reality caused by climate change. How can farmers mitigate the effects as much as possible? The PPC ‘Climate Adaptation Open Cultivation’ will work on practical solutions and innovations in the coming four years.

The trade and industry sector and research parties - Wageningen University & Research (WUR), the Northern Foundation for Arable Farming Trial Operations (Dutch acronym SPNA) and Delphy -have joined forces in the public-private cooperation ‘Climate Adaptation Open Cultivation’. This public-private cooperation (PPC) strives to mitigate the adverse income effects of extreme weather circumstances for arable farmers. In the period from 2020-2023, they will work on a combination of improved soil quality, cultivation measures, eliminating subsoil compaction and smarter and better irrigation.

Edwin Michiels, farmer and chair of the PPC’s supervisory group, stresses that there is no doubt about the need for this approach. ‘In arable farming, the damage incurred by draught, warm summers and flooding, is enormous. Some crops can become unprofitable as a result. Over the last few years, extreme weather has already caused significant damage. Climate change is expected to result in higher average temperatures, more heat-waves and an altered precipitation pattern,’ he underlines.

The ‘Climate Adaptation Open Cultivation’ programme encompasses four sub-research programmes, each of which focusses on targeted measures the farmer can take to keep the risks manageable. The first study, ‘Soil-water proof farming cultivation’ focusses on collecting knowledge about the risks contained in the current production systems for extreme weather and salination.

This forms a solid foundation for the other three projects that focus on climate-proof potato cultivation in practice, sustainable elimination of subsoil compaction and economical irrigation and water quality in the cultivation of starch potatoes. Project leader Daan Verstand (WUR): ‘We expect this research to yield practical tools that offer the farmer economic and ecological solutions for the short term and the long term.’

The different sub-project of this extensive research are closely linked and are carried out in close correlation by Wageningen University & Research (WUR), the Northern Foundation for Arable Farming Trial Operations and Delphy. The initiator is the branch organisation Arable Farming, with Agrifirm as a partner. Over the next four years, close to 1.4 million Euros in public and private funding will be invested in climate-proofing the arable farming sector.